"Investing in Africa's agriculture is the next best thing" 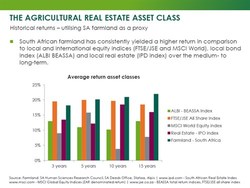 Investing in Africa's agriculture is the next best thing

Investors are being encouraged to look at adding agriculture into their portfolios as we witness significant declines in oil and commodity export returns.

Over 60 per cent of the world’s arable land is situated on the African continent, which makes for a very compelling Africa Agricultural investment case, says Craig Chambers, Old Mutual Investment Group’s Director of Strategic Projects.

At a media briefing in Johannesburg the investment group discussed the emergence of the agricultural sector as a viable asset class in a continent where 65 per cent of Africa’s labour force is in agriculture and constitutes 35 per cent of South Africa’s gross domestic product (GDP).

“And yet, as we know, the sad reality is 25 billion dollars in food imports are coming into Africa,” said Chambers.

“There is no doubt that the opportunity within Africa Agri is really really vast, we have a decent pipeline of anything between 200 and 400 million dollars in opportunities in Africa,” he added.

The world has always known that Africa, the motherland, is the land of riches and resources – Agriculturally the continent has always been the producer of most goods, so why has the sector only now inspired heavy investor confidence.

According to Duncan Vink, Joint Managing Director of UFF Agri Asset Management, the easy investments are done and now it’s time for the difficult sell, agriculture in Africa. While clearly we have not been maximising the agricultural potential that is Africa.

Vink states how thirty-nine million hectares of agricultural land in Africa is physically suitable for irrigation but currently only 7 per cent of this farmable land is irrigated, and in sub-Saharan Africa that figure is at only 3.7 per cent. 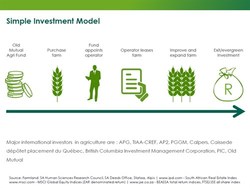 Using South Africa, Chambers explains how farming in the country reaffirms that investment there is an opportunity for institutional investors looking for a “good” capital preservation tool in Africa that is also a “reliable” inflation hedge and has low to negative correlations with traditional asset classes.

“South Africa’s farmland has yielded 22.1 per cent over 15 years (to end December 2013) compared to the FTSE/JSE Index at 18.2 per cent over the same period. It has also yielded consistently higher returns than international equity (MSCI World), local bond (ALBI BEASSA) and local real estate (IPD) indices over the medium- to long-term,” said Chambers.

According to Old Mutual’s research, it found that an improvement or growth in the agriculture sector tends to have a significant decrease in poverty and creates jobs.

“We have invested about R2 billion in South African farmland already and our track record on improving the healthcare services, improving education and creating jobs, has been phenomenal and what we want to do is recreate that model into Africa,” said Chambers.

As a continent that is quite use to being exploited, small scale farmers have to be a priority, as well as protecting Africa and making sure the continent benefits equally from global investors.

“We are going to partner with guys in Africa, we want operators that are African and essentially create more and more jobs and eventually at some point hopefully ten years down the line, when we exit that farm, sell it to African operators – having created an excellent world class productive farm with significant job creation potential, “said Chambers.

In essence, we don’t have much of a choice but to invest in Africa, according to Vink, a seventy per cent increase in agriculture production is needed to feed the more than nine billion people expected worldwide in 2050, of which 25 per cent will be in Africa, so as the demand for food soars on a global scale, the greatest opportunity for profits in agriculture is in Africa.