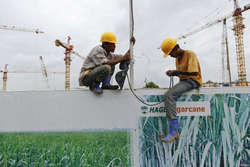 A steelmaker turning to pigs and animal feed, a property developer raising cows, a stockbroker milling rice and a real-estate-to-retail billionaire growing fruit and vegetables.

Three decades after Vietnam started moving away from a socialist-led farm economy towards manufacturing of big-brand textiles and electronics, some of its top firms are carving out opportunities in its $37 billion agriculture and seafood sector and looking to expand overseas, helped by free trade pacts.

"We'll have global food shortages by 2050. If we invest fundamentally and correctly, this market is infinite," said Nguyen Duy Hung, chairman of Vietnam's top brokerage, Saigon Securities Incorp, who has a side business he's expanding into rice, seafood and supermarket produce.

Vietnam is among the world's top exporters of rice, coffee, cashew nuts, seafood, pepper and rubber and it shipped $24.5 billion of farm and fisheries produce last year.

But the World Bank says the value of its agribusiness is just 1.2 times that of its primary agriculture, compared with 2.7 times in South Korea. And the country still relies on billions of dollars of foodstuff imports.

Hence the unlikely interest in food from industrial firms such as steelmaker Hoa Phat Group, which has converted its minerals unit to livestock and animal feed.

It has built a new feed plant with annual capacity of 300,000 tonnes, aiming for 1 million tonnes, and wants to be raising a million pigs a year by 2020.

"Although this new sector is extremely competitive, just as much as the steel industry, we firmly believe we will be successful," CEO Tran Tuan Duong told shareholders recently.

Vietnam's only billionaire, Pham Nhat Vuong of Vingroup , is piling into private schools, hospitals and shopping malls. But his latest move is a little off-piste - a $91 million investment in growing fruit and vegetables.

And on the home page of real estate firm Hoang Anh Gia Lai (HAGL), it's grazing cows rather than condominiums that meet the eye: it has just listed a cattle and rubber unit with a market value of $1.1 billion, bigger than the parent.

HAGL predicts nearly half the group's revenue this year will come from cows. It wants to tap milk demand that has grown 36 times over in the past quarter-century, satisfied in part by imports worth $1 billion a year.

It is also investing in cattle to meet growing demand for beef: imports from Australia have surged 52 times in the past two years to 181,000 cows in 2014.

That means potential in animal feed, too, currently supplied 42 percent by imports. It's a business sector worth $7 billion but dominated by foreign players such as Thai giant CP Group, whose Vietnamese unit has about a fifth of the market.

Vietnam is aggressively pursuing Free Trade Agreements, another factor attracting local tycoons to the farm sector, even if it means more competition at home from overseas players.

Agreements were reached recently with South Korea and the Russian-led Eurasian Economic Union and deals are edging closer with the European Union and the Trans-Pacific Partnership, which will cover 12 countries with a combined GDP of $28 trillion, among them Australia, Japan and the United States, Vietnam's top export destinations.

The government "hopes to accompany businesses during the industrialisation and modernisation of agriculture and the rural sector of our country", Deputy Prime Minister Hoang Trung Hai told a recent conference on private investment in agriculture.

It is also considering tax incentives for foreign operators in the sector if they develop human resources, infrastructure and larger fields to improve productivity, quality and technology.

Just 1 percent of Vietnam's registered firms are in the agricultural sector and nine-tenths of those are small and medium-sized enterprises.