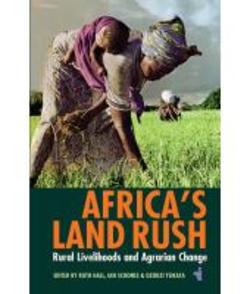 Ruth Hall of PLAAS co-edited the book with Ian Scoones and Dzodzi Tsikata. It will be launched in September 2015. The case studies in this soon-to-be-published book explore the processes through which land deals are being made; the implications for agrarian structure, rural livelihoods and food security; and the historical context of changing land uses, revealing that these land grabs may resonate with, even resurrect, forms of large-scale production associated with the colonial and early independence eras. The book depicts the striking diversity of deals and dealers: white Zimbabwean farmers in northern Nigeria, Dutch and American joint ventures in Ghana, an Indian agricultural company in Ethiopia's hinterland, European investors in Kenya's drylands and a Canadian biofuel company on its coast, South African sugar agribusiness in Tanzania's southern growth corridor, in Malawi's "Greenbelt" and in southern Mozambique, and white South African farmers venturing onto former state farms in the Congo.

You can download Chapter 1. The Contexts & Consequences of Africa’s Land Rush here.

Or pre-order the book here.