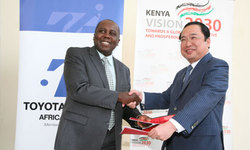 Amatheon-Agri Group — a German agribusiness and food company — has teamed up with Toyota Tsusho Corporation in a $10 million partnership project in Zambia.

The joint venture highlights the increasing importance of the agricultural sector across the continent and will culminate in the building of a large-scale agro-project of 2 700 hectares of land for the cropping of maize, wheat and soya.

The collaboration of the two companies is part of the overall development of Amatheon’s already 40 000 hectares titled farm block and the Amatheon-Agri Group will act as the majority stakeholder and operating partner of the company.

Carl Heinrich Bruhn, CEO and founder of Amatheon Group, said the project showed that the two companies shared understanding of responsible and profitable investment in the growing agricultural sector of Southern Africa.

He added that as part of its sustainable development objectives, the joint venture will engage in the support of local smallholder farmers by providing them with training and access to market.

“We are excited about this partnership and we look forward to leveraging Toyota’s extensive technical know-how and international network with Amatheon Agri-Group’s expertise and sound operating procedures” Bruhn said.

Toyota Tsusho is a member of Japanese Toyota Group and is active in 53 countries in Africa.