Getting the facts right on Agrica/KPL agricultural investment in Tanzania 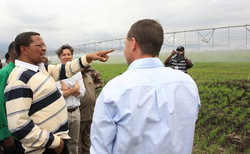 Getting the facts right on Agrica/KPL agricultural investment in Tanzania

On June 17, 2015, The Oakland Institute, Greenpeace Africa, and Global Justice Now released the report Irresponsible Investment: Agrica’s Broken Development Model in Tanzania, documenting the devastating impacts that the British company Agrica’s industrial rice plantation in Mngeta, Tanzania has had on local communities in the past 7 years. In his response to the findings of the report, Mr. Carter Coleman, CEO of Agrica, has broadly rejected firsthand testimonies from affected communities. In an email message that was circulated to his investors, Mr. Coleman accused our organization of using flawed research methodology, questioned the integrity of our researchers, and suggested that the local villagers interviewed during the research have a money-driven spirit that might have prompted their complaints. The Norwegian Investment Fund for Developing Countries (Norfund), a key backer and financer of the project, has released a similar response. This statement is the Oakland Institute’s response to some of the claims made by both Mr. Coleman and Norfund.

Positive Impact of the Project and Social Responsibility

Contrary to the claims made by Mr. Coleman, we are confident with the report’s balanced presentation. Our analysis details some of the project’s benefits, including the positive impact of trainings in the System of Rice Intensification (SRI), the number of jobs created, and some of the social responsibility activities like the construction of a health centre and school rooms. While recognizing these positive outcomes, our report does identify some serious issues, which are key concerns of the community and remain unresolved. For a project that has received such significant amounts of money from development agencies (Norfund $10 million; DfID $10 million; USAID and AgDevCo $850,000; AECF $750,000) to uphold the health centre and the few benefits as the best practice for “development" investment in Africa is a flawed approach.

In his response to the report, Mr. Coleman values the social responsibility components of the project at $150,000 for its Community Development Fund (for school rooms, water systems and other projects) and “the health centre that provides $60,000 annually in subsidised health services to the community.” These figures have to be put in perspective with the $4 million and $7.3 million net profit that the company is expecting in 2015 and 2016, respectively, according to its business plan (and the net profit is likely to rise further in the following years given KPL’s projections to increase production to 53,000 tons of rice annually by 2016).

Building school rooms and a health centre are positive of course, but the report shows that beyond this infrastructure, the overall development model followed by the project is causing damage today and will do more harm in the long term, as a key component of the project involves transferring control of land and food systems away from communities and into the hands of corporations. True development is not about building a few social infrastructure buildings, but about ensuring communities and future generations have the means to live a life with dignity in a healthy environment. By taking away land and undermining the livelihoods of local farmers, the Agrica project jeopardizes the ability of local communities to enjoy sustainable development.

In his response, Mr. Coleman rejects the testimonies of the evicted villagers regarding the compensation they received. However, the procedure he describes not only differs from what respondents reported to our researchers, but also from what was described by a researcher for Pelum as well as from the procedure described in the Resettlement Action Plan (RAP). Mr. Coleman claims that everyone was offered 3 acres of land plus TZS 10,000 per acre ($6) if their land exceeded 3 acres. However, respondents claim they were presented with a choice between cash compensation, KPL finding them a new area (land-for-land exchange), or finding alternative land themselves. For example, one respondent said that, given these choices, he opted for cash compensation and he alleges to have received TZS 10,000 per acre for his 5 acre farm—50,000 total. This matches neither Mr. Coleman’s claims nor the RAP: "values are assessed based on the average price of land at specific area. For Mngeta Farm project the Valuer adopted 30,000 TZS per acre based on the current market price at Mkangawalo."

Furthermore, the rebuttal over the actual procedures for farmers to receive the promised compensation hides one key element raised by the report: villagers had to give up their right to land forever for very meagre compensation – ranging from TZS 10,000 ($6) to 30,000 ($17) per acre, which at best allows renting a one-acre parcel of farmland in the same area for a single season. The report also contrasts the low compensation offered as compared to the cost of productive agricultural land in other parts of the world. In his response to the report, Mr. Coleman fails to comment on woefully inadequate compensation within the “very” good deal made by Agrica.

The significant increase in the price of land since the project started and the limited availability of farmland in the area is a serious issue raised by locals, as it not only undermines their livelihoods but also compromises access to land for future generations. Mr. Coleman denies that Agrica’s rice plantation has led to increased pressure on land and explains the current pressure as a result of recent migration to the area. He explains, “The main driver for land inflation in the Valley is the high rate of immigration from other areas of Tanzania,” adding that only 29% of the local villagers are native to the area. Previous research in the region confirms this 29% figure but also indicates that 82% of the migrants to the area came before 2000, which doesn’t make them recent migrants as claimed by Mr. Coleman. The Oakland Institute’s research focused on the impact of the project since it started in 2007. Mr. Coleman’s argument appears to be in bad faith, as he is misusing demographic data in order to reject the project’s impact on the important issue of limited access to land faced by local villagers.

Debt and the Failure of the Outgrower Scheme

Mr. Coleman recognizes one of the major issues raised by the report, which is that farmers were driven into debt through the outgrower scheme and that a number of them defaulted on the loans they contracted to buy agricultural inputs. Yet, shockingly, instead of recognizing the plight of the destitute farmers, Mr. Coleman has chosen to accuse our researchers of advising the farmers to default on the loans—without providing any evidence.

The outgrower scheme is essentially Agrica's social licence in Tanzania. Without it, the project is just a large-scale farm. The scheme is also a justification for the aid money that has been channelled to Agrica. It is precisely this aspect of the farm that has not worked after 7 years of operation. This failure is not contested by Mr. Coleman. The outgrower scheme has not worked because it uses a type of agriculture that is inherently risky. It opens farmers to the risk of the fluctuations in both global commodity prices (rice in this case) and farm input prices. The disastrous impact of this risk is exactly what has come to bear in the case of Agrica.

In each research mission conducted by the Oakland Institute, peoples’ frustration and issues, detailed in our report, grew. While farmers reported that training in SRI has improved their yields, joining the outgrower scheme had proven disastrous for their livelihoods and left them in debt. SRI does not need to be linked to large-scale plantation agriculture and has been implemented in Madagascar, India, Mali, and elsewhere by smallholder farmers with great success. In the case of Agrica, with its ties to the heavy chemical input regime, it might have benefitted Yara and Syngenta (or at the very least, opened new markets for them) but left the outgrower farmers in debt, resulting in them defaulting on their loans and forcing distress sales of the few assets that they have.

Both Norfund and Mr. Coleman challenge the research methodology followed by the Oakland Institute. Their accusation that the report relies “largely on interviews with 40 anonymous people (of more than 35,000 inhabitants) in the community” is gravely misleading, given the fact that the project directly affected 230 households, whose land and/or homes were taken away by the plantation. The research primarily looked at the people who have been evicted as well as the employees of the company. Furthermore, our methodology, which is detailed in the report, indicates that beyond the dozens of individual interviews conducted by our researchers, our research also involved focus group discussions, community group discussions, and discussions with key informants.

As we mention in the analysis, we did not go looking for something bad to report. In fact, we had hoped to find a good model to share—an example of how things can be done differently. We were surprised by the negativity around the project among the local communities, and for that reason we decided to conduct three successive research missions in order to corroborate and follow up on the initial findings. Our due diligence included speaking to the communities on the ground and verifying facts through three field visits (with different researchers to ensure unbiased data gathering) starting in 2012, the second in 2013, and the last in December 2014.

In its response, Norfund states that “It is not possible to verify the accuracy of these allegations or follow up on complaints.” As a key backer of the project, Norfund  has the responsibility to urgently undertake due diligence on the ground and verify for themselves the report’s findings rather than  relying on the word and the documents provided by the company alone, which appears to be Norfund’s current strategy.

In his May 15, 2015 email, Mr. Coleman repeated a warning that he has said on several occasions in his communications with the Oakland Institute: “One should bear in mind, that people, hoping for cash or assistance, do not always tell the truth.” Thus, his response to grievances by local villagers appears to be that locals want money.

What we detail in our report are the real-life experiences of people who have been dealing with a top-down approach from Agrica and its investors. Our report provides a platform to local people to have their voices heard and to express their concerns. It is shocking that Agrica has chosen to dismiss the concerns of the local villagers, describing these as “unscrupulous propaganda” and an opportunistic desire to get more money when they can.

This growing trend of foreign investors taking over natural resources in developing countries is pitting poor farmers against big companies with money and connections. Because of this inherent inequality, a wall of silence is built and the story we hear, the company’s side of the story, always touts projects as a success. Our recent report provides an opportunity for the farmers to be heard and taken into consideration.