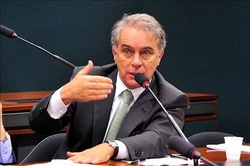 It was years ago, but I remember it like it was yesterday.

Brazilian federal congressman Marcos Montes swooped in on me at a town park in Uberaba, Minas Gerais, and gave me a hearty hug and a smile. And then he was gone, just like that, hugging the next potential voter in his reelection bid.

Having never been embraced by a political candidate before, I was left confused. But Montes knew just where he was going—on to the chairmanship of the Agriculture Caucus in Brazil's Chamber of Deputies, where he aims to turn back the clock on the rules concerning foreign ownership of his country's farmland.

Five years ago, Brazil's Attorney General Office issued a new interpretation of an old, business-friendly rule that made it harder for foreign companies to buy the country's farmland. They did it in reaction to growing concerns that foreigners were slowly taking over that vital national resource. Frustrated and well-meaning activist groups were buying up vast swaths of the Amazon in order to prevent deforestation.

Back in the days when Congressman Montes hugged me in the city park, Brazil's eagerness to attract foreign investment brought about a rule that said something deceptively simple: all Brazilian companies must be treated as equals. Sounds straightforward enough, right? But what if a company is duly registered in Brazil, but is 99% owned by another, overseas, company? Well, no matter how much foreign ownership it has, that company is considered a Brazilian company like any other, and can buy and sell land as it pleases.

That loophole didn't matter much when commodity prices trudged along at rather low but steady rates. But when prices shot up, U.S. and other farmers joined European environmentalists in snapping up land, though their aim was to work it and not to leave it pristine. They began setting up Brazilian companies 99% owned by their home country farming companies and corporations.

This is a country with an active land reform effort. If you don't pay your taxes or don't produce up to the amounts published in an official index, your Brazilian farm can be confiscated, carved up into small plots, and distributed to those who don't own any farmland. The idea of foreigners buying farmland and holding title to vast tracts of the Rainforest, was anathema.

So the attorney general acted. Individual foreigners buying any more than a smallish tract, and all foreign corporations, would need permission ahead of time to buy Brazilian farmland.

Unfortunately that policy went over like a led balloon. Brazil, once a rising economic star and a parking lot for zillions of world investment dollars, is now facing its own growth challenges.

Just like in the old days, Brazil now needs to fight to attract foreign investment rather than lie back and bat its eyelashes like it did when economic times were so good.

Under the new, strict rules, the flow of dollars into Brazil in the form of farmland investment has slowed to a trickle, and Montes says, "We shot ourselves in the foot" with the new interpretation of the foreign land investment legislation.

So he is introducing a bill to allow foreign companies to buy farmland again without the previous-approval restriction. State-run companies and investment funds would still be given the cold shoulder, but Marcos wants to call back the old days, when investors were pumping money into Brazil's Ag sector and politicians not only kissed babies, but embraced foreigners in the park.