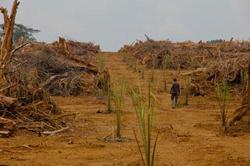 Mundemba: - Herakles Farms, a New York based investment Firm and the parent company of SG Sustainable Oils Cameroon (SGSOC) which has been under the spotlight of increasing local and international opposition for its intention to establish oil palm plantations in protected areas (including the iconic Korup National Park in south west Cameroon) has abandoned all operations in the Mundemba and Toko Subdivisions respectively and in Ndian Division on May 29, 2015.

The decision was announced to the few remaining workers of Fabe and Lipenja I, Batanga, nurseries on May 29, 2015. After their shifts, affected workers notified SEFE of developments. Workers confirmed that the announcement was made by a man who presented himself as the new CEO of the company. The workers said the reason given for suspending operations was to enable Herakles to intensify planting of palms in the Nguti area before returning to Mundemba and Toko concessions in 2017/2018. The company spokesman blamed current management for prioritising timber extraction over planting of palms. Considering their capabilities for carrying out planting this statement was seen as a tactical excuse for a dishonourable exit from the area.

In April, 2013 during a meeting with investors, Herakles announced their intention to sell their 73,000 ha concession in 2018. But a Presidential decree signed in November 2013, granted the company 19,843 ha of land lease for a 3 year probation period. The decree also demanded the company fulfil certain conditions which were not met, notably in the development of social facilities, conducting an environmental and Social Impact Assessment (ESIA) in the new concession, and payment of land rents to the tune of 200,000,000 FCFA. Treasury and local council officials have confirmed to SEFE that Herakles is yet to pay land rents demanded in the Presidential decrees of November 2013, yet are still operating in the area, in clear violation of the presidential order.

Some workers who solicited advice from SEFE say workers were awarded certificates of appreciation and asked to go to the Divisional Office of Labour, Mundemba to receive money. Workers were left unclear if these represented wages for the month of May or compensation for the entire period they have worked in the company. The letters handed to each of the worker simply stated that they should go to the labour office for payment without indicating the amount of money they would receive.

This is not the first time that Herakles has laid off their workers without compensation. An official of the National Social Insurance Fund contacted in Mundemba confirmed Herakles has not registered a single worker in their office. Some of the workers who spoke to SEFE say they are disheartened because they were recently recalled to work and were laid off again a few days later. They vowed to go to the labour office to establish what monies they are due, as indicated in the letters handed to them, saying “we have lot of mistrust for Herakles”.

Last week the company laid off its managers and personnel at its Limbe office. SEFE sources say the company has shut down its Limbe office for good. Reports from the two villages of the Ngolo clan (Ikoti and Mobenge) indicate villagers are very happy with the news. Some weeks ago, communities in villages where Herakles wanted to proceed with extraction of timber forbade them to continue a land demarcation exercise. Tensions and tempers ran very high in Mundemba/ Toko concessions due to Herakles’ unilateral decision to take land from some villages the under names of other villages.

The Mundemba and Toko concession is located astride the Iconic Korup National Park and Rumpi Hills Forest Reserve. The latter being a complex watershed formation with all the freshwater from it draining into the Korup Park. Establishing a huge palm oil plantation in this area would have brought disastrous pollution resulting from pesticides, fertilizers and herbicides and sewage disposal; all affecting the health of animals in the Korup Park that depend on the water.

It is SEFE’s assessment that the Herakles project was simply a poorly conceived project, badly managed, in the wrong place.

NB. For background information, the report "They want to take our bush" summarises the findings from an independent assessment by Forest Peoples Programme (FPP) of the processes employed by Herakles/SGSOC to obtain the Free, Prior and Informed Consent (FPIC) of communities to be affected by their palm oil development project in Mundemba and Nguti Subdivisions in South West Cameroon.