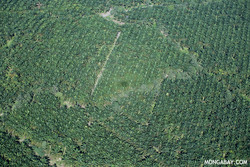 On 5th May 2014, a joint force of the West Kalimantan Police Mobile Brigade and PT. SMP security officers forcibly arrested five members of Batu Daya village. The arrests followed demonstrations by community members against PT. SMP land clearance operations conducted outside its authorized permit area without the consent of the local community.

Subsequent ground checks by a Duty Field Officer of the Secretary of Ketapang District confirmed the unauthorized seizure of community land by PT. SMP (as detailed in report no.094/31/PLM, 22 May, 2014). Based on the results of ground checks, the District Government issued a decree warning the company to stop developing plantations outside its permit area.

As well as confirming that PT. SMP was developing areas outside its permit area, official investigations confirmed that the palm oil company was also clearing land using fire, which is a violation of Indonesian law as well as the RSPO standard. Additionally, during consultation phases undertaken prior to land clearing, PT. SMP did not inform the community about the EIA (environmental impact analysis) of its proposed development, or its intention to withhold profits from the local community for a period of up to eighteen years.

Since then, local NGO LinkAR and community representatives from Batu Daya village have made multiple complaints to the district administration of Ketapang. Their complaints focus on PT. SMP's continued use of community land, for the purposes of oil palm development, without community consent.

A subsequent decree by the district administration (Decree No.100/2218/PEM) asserted that the location permit of PT.SMP/First Resources had expired and was no longer valid. In flagrant violation of the Decree, PT. SMP continues to undertake plantation development based on the expired permit.

Community organisations are now asking the RSPO to investigate the situation to confirm whether current PT. SMP/First Resources operations breach RSPO standards by clearing and developing land, despite permits issued by the Indonesian Government being expired and invalid.

Local activists are calling on the RSPO to repeal the company’s New Planting Procedure (NPP) and require PT. SMP to remedy the loss of community lands taken without consent.