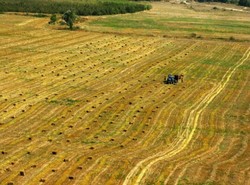 KIEV, May 26 (Xinhua) -- The Ukrainian Agriculture Business Association (UCAB) on Tuesday urged the government to lift its ban on farmland sales so as to spur the development of the agro-food sector.

"We suggest establishing the market of agricultural land starting from January 1, 2016 through selling state-owned farmland by auction," Alex Lissitsa, head of the UCAB, told a press conference.

Lissitsa said that the sales of private farmland should be launched as the second phase of the land market reform.

Lifting a moratorium on farmland sales will increase competition in the market and open new opportunities for agro-businesses, Lissitsa said.

Ukraine, with around 42 million hectares of agricultural land, imposed a moratorium on farmland sales in 1992, which expires on Dec. 31 this year.

Earlier this month, Ukrainian Agricultural Minister Olexiy Pavlenko said that the moratorium could be further extended as the crisis-hit country needs at least 100 million U.S. dollars to carry out the farmland market reform.

After land privatization in 1996, Ukrainian land owners work with farmers under lease agreements.