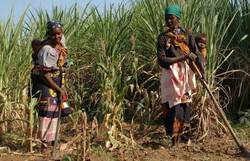 ROME, May 25 (Thomson Reuters Foundation) - Mozambique is mulling a plan to lease 240,000 hectares of prime farmland to investors to grow crops for export, threatening to displace more than 100,000 local residents, activists and academics said, citing a leaked document.

An estimated 500,000 people will be affected by the plan, with 100,000 forced from their homes, Ntauazi said, citing a leaked presentation to would-be investors and satellite images of communities that would be impacted.

The leaked plan is the latest in a series of major foreign-based agricultural project proposed in Mozambique and other African countries that supporters say will bring jobs and boost land productivity but critics fear will displace local people and rob small-scale farmers of their livelihoods.

"The area holds some of Mozambique's best land and local farmers have been living there for more than 30 years," Ntauazi told the Thomson Reuters Foundation.

The proposal follows another major ongoing agricultural project in Mozambique with the government planning to approve the Brazilian-and-Japanese backed ProSavana Project covering several million hectares to grow soybeans by the end of the year.

The proposed Lurio River project, involving two hydro electric dams along with agriculture plans, is currently waiting approval from the Council of Ministers, a government body, researchers said. It's unclear when a decision will be made.

"This is a secret (plan), no consultation, (and) no published information from the government," Tim Wise, director of Tufts University's Global Development Institute, told the Thomson Reuters Foundation.

Officials at the country's agriculture ministry did not make a spokesperson available to comment on the proposed project.

The initiative is expected to cost $4.2 billion, a sum Mozambique's cash-strapped government would not be able to finance without outside support, Ntauazi said.

Mozambique is one of the world's poorest countries, ranking 178 out of 187 nations on the U.N.'s Human Development Index.

To increase food production, the government should invest in local farmers, many of whom still use the most basic hoes to till their fields and lack access to the best seeds, Wise said.

Residents living and working on the land in question had no idea they could be displaced, he said, after visiting some of the areas in Nampula province earlier this year.

Under Mozambique's land laws, the government is obliged to consult local communities, even if they don't have formal ownership of the land they farm, Ntauazi said. (Reporting By Chris Arsenault; Editing by Ros Russell)