Tanzania: Govt to freeze multi-billion shilling pact with US firm 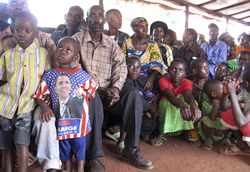 Refugees at risk of losing the lands they farm to Agrisol Photo: Reuters)
Guardian (Tanzania) | 22 May 2015

Govt to freeze multi-billion shilling pact with US firm

The government intends to put on ice a multi-billion shilling derivative rights agreement signed with the US – based AgriSol Company over consistent violation of its terms.

The company sealed a lucrative land deal with the Tanzania Investment Centre  (TIC) involving 10,000 hectares that belonged to the former National  Ranching Company (NARCO) at Uvinza in Kigoma Region for agricultural  investment.

But since 2012, when it was awarded by TIC derivative rights requiring it to  start investment in three years and issue six-month implementation reports,  it has done nothing.

The Deputy Minister for Agriculture, Food Security and Cooperatives, Godfrey  Zambi, said this in the House here yesterday on behalf on the Prime  Minister.

He said the government was in the process of breaking the agreement as he  was answering a question posed by David Kafulila (Kigoma-south NCCR- Mageuzi).

The latter said the land was given to the US company by the government  without the prior consent of wananchi.
“So, what action is being taken by the government on the investor who has  been allowed to invest on the land that is close to the district  headquarters?” He queried.

Zambi clarified that the land, which covers 15,000 hectares, was used by  refugees from the Democratic Republic of Congo (DRC) in 1994.
He explained that after the refugees left the country, the Kigoma regional  administration offered it to Uvinza District for setting up administrative  structures and agricultural investment under a letter reference no. CD  31/133/01 of February 27, 2010.

He said in 2011 the Ministry of Livestock Development and Fisheries  permitted that the farm should be incorporated in the Kigoma land use plan.  As a result 10,000 ha were apportioned to TIC and the 5,000 ha remained with  the district.

“This is when TIC had to give derivative rights to the investor, but on  condition that the investment should begin within three years and the  company should be reporting to TIC every six months,” he said.

The deputy minister went on to say that the investor had implemented neither  of the agreed terms. Therefore the government resolved to terminate the  contract and look for another investor in the area.

He was optimistic that the government would offer part of the land to  wananchi should they need it for agricultural activities.

Tanzania: Contract between TIC and investor under scrutiny

Dodoma — The government is in the process of revoking the contract entered by the Tanzania Investment Centre with an investment company, Agrisol, for lease of 10,000 hectares in Uvinza District, Kigoma Region.

Deputy Minister of Agriculture, Food Security and Cooperatives Mr Godfrey Zambi told the National Assembly on Thursday that the lease contract would be revoked for failure by the investor to comply with the terms.

He was responding to a question by David Zacharia Kafulila (Kigoma South-NCCRMageuzi), who pointed out that the privatization of the farm in Uvinza district to the investor was done without involving the villagers and was made under pressure from above.

The lawmaker, therefore, sought to know what steps the government would take on the investment as the investor was given land which surrounds the district headquarters.

Mr Zambi pointed out that the farm was a government land number 206 with 15,000 hectares and was not village land.

The land, he said, was a ranch for livestock under the Ministry of Livestock and Fisheries. In 1994, the deputy minister said, it was allocated for refugees from the Democratic Republic of Congo (DRC) and after the refugees left the area, regional authorities requested to be given the farm to be used for development activities.

Such activities included construction of the head office of the district and investment in agriculture and livestock. According to him, in 2011 the ministry agreed to surrender the farm to Kigoma Region administration for the said purposes.

In September 2011, he said, a survey was conducted for proper land use plan where 10,000 hectares were allocated to the TIC for investment purposes and 5,000 hectares were left for construction of the district head office.

Mr Zambi explained that thereafter, Agrisol Company applied to TIC to make developments on the land and in 2012, TIC entered into a lease agreement with conditions that the company should start investment within three years and report on the implementation in every six months. The deputy minister pointed out that the investment company failed to adhere to such contractual terms.