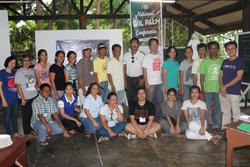 “Oil palm was hyped as a ‘tree of peace’ with its promises of livelihood and development, food security, poverty alleviation and economic stability.  However, the reality proves otherwise and this was confirmed in the conference,’ said Rhoda Gueta, secretariat coordinator of the Asian Peasant Coalition (APC), who joined the meeting.
News Release
Palm oil plantations left peasants and indigenous peoples landless, deprived of livelihood, says APC

On May 9-10, a National Oil Palm Conference was held in Davao City, Philippines which was organized by the Rural Missionaries of the Philippines-Northern Mindanao Region (RMP-NMR), Center for Trade Union and Human Rights (CTUHR) and Hongkong-based Asia Monitor Resource Center (AMRC). Thirty (30) representatives from 20 organizations of indigenous peoples, farmers, trade unions, agricultural workers and advocates from Luzon, Palawan, and Mindanao and one participant from Indonesia attended the conference.

“Oil palm was hyped as a ‘tree of peace’ with its promises of livelihood and development, food security, poverty alleviation and economic stability.  However, the reality proves otherwise and this was confirmed in the conference,’ said Rhoda Gueta, secretariat coordinator of the Asian Peasant Coalition (APC), who joined the meeting, who joined the meeting.

“The people’s access to food and ownership and control of land has been undermined by massive crop and land use conversion from staple food production to oil palm. The peasantsand indigenous peoples were left landless and deprived of livelihood,” added Gueta.

“One of the cases presented in the conference is the landgrabbing of 520 hectares of Higaonon’s ancestral lands for A. Brown Company’s oil palm plantation expansion in Bagocboc and Tingalanvillages inOpol, Misamis Oriental. The Higaonon’s displacement has led to disruption of their agricultural and other traditional practices in their ancestral lands, facing hunger and poverty since they have not been provided with alternative sources of livelihood,” Gueta narrated saying that “A. Brown is now A. Brown Energy and Resources Development or ABERDIafter merger with its wholly-owned subsidiary, Nakeen Corporation. ABERDI is now operating a 1,350-hectare oil palm plantation located in the areas of Kalabugao, Impasug-ong, Bukidnon and Tingalan, Opol, Misamis Oriental.  It imports germinated oil palm seeds from Thailand, Papua New Guinea and Costa Rica for its nursery.”

Gueta also cited the results of the International Fact Finding Mission (IFFM) that the APC co-organized with KMP, KMP-NMR, RMP-NMR, Kalumbay and the Pesticide Action Network Asia Pacific (PAN AP) on May 6-10, 2012 disclosing that,” ABERDI is still operating today even if they have not obtained any permit to operate an oil palm plantationover an identified grazing land.  Moreover, with Bagocboc and Tingalan communities’ pending ancestral domain claim, ABERDIhas not secured prior certification from the National Commission on Indigenous Peoples(NCIP)that the area it has applied for does not overlap with an ancestral domain, including areas for which there is a pending application for Certificate of Ancestral Domain Title.”

“The IFFM findings were verified during the on-site hearing of the House Committee on National Cultural Communities on March 11-12, 2015. The hearing stemmed from House Resolution No. 690, introduced by Anakpawis Representative Fernando Hicap, directing the Committee on National Cultural Communities to conduct an inquiry into the plight of Higaonon farmers in Barangays Bagocboc and Tingalan in Opol town. In their initial findings, they cited that government agencies, like the Department of Natural Resources (DENR) and the NCIP, were not in harmony, causing confusion in the issuance of lawful tender for both the indigenous peoples (IPs) and the company. It also said that DENR and NCIP should take immediately review their respective regulations to clear the confusion. It also noted that violations were committed due to unclear and conflicting policies of the DENR and NCIP and the present IPRA law has to be amended to come up with clear definitions on the inherent rights of the IPs,” Gueta ended.

At present, 90% of all palm oil comes from Indonesia, Malaysia and Thailand. Although the palm oil industry in the Philippines started in the 1950s, oil palm plantations are concentrated in Mindanao and some parts of Visayas, their aggressive expansion began only in the past decade.

“Under the Philippine Development Plan 2011-2016 of the Aquino government, palm oil development is identified as a priority industry for national convergence in Caraga (Region 9) under the National Industry Cluster Capacity Enhancement Program (NICCEP). The NICCEP is a project supported by the Japan International Cooperation Office managed by the Department of Trade and Industry,” remarked Sylvia Mallari, International Relations Officer of the Kilusang Magbubukid ng Pilipinas or Peasant Movement of the Philippines (KMP), who also attended the conference.

The APC said that according to the CTUHR study, “Oil palm plantations are among the biggest in the Philippines. There are currently 54,448 hectares planted to oil palm in the country. In 2010, Caraga region accounts for 55 percent of the country’s palm oil production and is host to the two largest nucleus plantations and oil millsThe Southern Philippines Development Authority (SPDA) has also reserved 304,000 hectares for the expansion of oil palm plantations. From the present six palm oil mills, there are plans to expand this to 17.”

“The Aquino government and players are hell-bent on expanding oil palm plantations of more than 200,000 hectares by end of 2016 in Mindanao alone. Overall, the target area for the expansion of oil palm plantations in the country is 975,300 hectares (98% of which are located in Mindanao). This plan will further dislocate peasants and indigenous peoples. Further, this will result in massive destruction of forests, loss of biodiversity, and without doubt contribute to the global problem of climate change,” ended Mallari also the global co-coordinator of the Peoples Coalition for Food Sovereignty (PCFS)

The conference participants are calling to “End corporate-driven landgrabbing!” They also call for “Genuine agrarian reform and national industrialization, now!”

Finally, the conference declared the establishment of a network opposed to the oil palm plantations in the Philippines, the Task Force NO PALM (or Network Opposed to Oil Palm Plantations) to serve as a platform for coordination, research, education, information dissemination and other campaign-related efforts, and as a stepping stone for the eventual establishment a broad and strong mass movement against oil palm plantations in the country in the future.