The biofuels boom and bust in Africa: a timely lesson for the New Alliance initiative 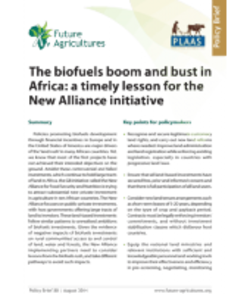 The biofuels boom and bust in Africa: a timely lesson for the New Alliance initiative

Policies promoting biofuels development through financial incentives in Europe and in the United States of America are major drivers of the ‘land rush’ in many African countries. Yet, we know that most of the first projects have not achieved their intended objectives on the ground. Amidst these controversial and failed investments, which continue to hold large tracts of land in Africa, the G8 initiative called the New Alliance for Food Security and Nutrition is trying to attract substantial new private investment in agriculture in ten African countries. The New Alliance focuses on public-private investments, with host governments offering large tracts of land to investors. These land-based investments follow similar patterns to unrealised ambitions of biofuels investments. Given the evidence of negative impacts of biofuels investments on rural communities’ access to and control of land, water and forests, the New Alliance implementing partners need to consider lessons from the biofuels rush, and take different pathways to avoid such impacts.