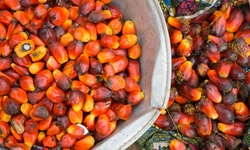 It’s right to hold destructive palm oil companies to account, but until we look to the organisations funding their activities we’re missing an important part of the puzzle

Author, analyst and campaigner, Andrew works for Global Witness and is a fellow of the New Economics Foundation

Whether its food you’re putting in your mouth, or products you’re putting on your body, the probability is that half of them contain palm oil. That’s no accident, nor the result of some natural evolution in our eating habits and predilection for cosmetics. It’s because palm oil makes big profits for corporations.

But it takes money to make money, and large scale investment is pushing the expansion of plantations. Take the recent example of Credit Suisse, Mitsubishi UFJ Securities and the Oversea-Chinese Banking Corporation, which has engineered a $400m (£260m) bond issue on behalf of Golden Agri-Resources (GAR), part of the giant Sinar Mas Group.

Reeling under the relentless encroachment of palm oil plantations are falling rainforests, the people whose livelihoods depend on them and the climate we all depend on. Once it was just chainsaws and the lust for tropical timber that threatened forests, but increasingly it is the march of large scale, commercial agriculture. Indonesia alone plans to convert 18m hectares of rainforest - an area about the size of Uruguay - to palm oil by 2020.

GAR, on whose behalf the $400m bond issue is being organised, happens to be the key backer of Golden Veroleum Liberia (GVL), a palm oil developer with a concession which has been subjected to a complaint to the Roundtable on Sustainable Palm Oil (RSPO) dating back to 2013 on behalf of local communities.

In the ongoing case, the developer is accused of violating the planting procedures, principles and criteria of the RSPO. Earlier this month, the Forest Peoples Programme, which campaigns for the rights of forest dependent communities, said that GAR and GVL were “compounding poverty and food insecurity by taking land without community consent and making hollow promises of development benefits.”

This is not an isolated example. Campaign group Global Witness, which works extensively on tropical deforestation and land grabbing issues, drew attention to how European banks and pension funds financed Wilmar – the world’s biggest palm oil company - to acquire, or “grab”, land in Uganda.

Since the financial crises of 2007-2008, land and the commodities grown on it have been hugely attractive to a more risk averse investment community. But palm oil in particular, with its incredibly broad range of consumer uses, has been more attractive than most.

“Loans and bonds backing palm oil expansion have been steadily increasing over the past five years, amounting to tens of billions of dollars per year,” says Tom Picken of the Rainforest Action Network. “This has enabled a surge of palm oil planting across the Congo and Amazon, as well as continued expansion onto the peat forests of Indonesia and Malaysia, destroying habitats and fueling conflict, with local communities forced off their lands.”

The investor mood was captured by MoneyWeek magazine in 2012 when it hyped palm oil as a “long term bull market”. With breathless enthusiasm its advice on how best to make a profit was the “simple and safe” route of “buying plantation shares”. The one company MoneyWeek picked out for being “as good a pure play on palm oil as you’ll find” was GAR. Their advice came just a year before the complaint against GVL, the company backed by GAR, was submitted to the sector’s voluntary oversight body, the RSPO.
sustainable business

If the financial crisis should have reminded investors of anything, it is to fear hype. In late 2014 the price of palm oil fell dramatically as a combination of climate, demand shifts and other crops doing well shook the market.

Ironically, one reason for previous investor confidence had been that severe droughts in 2012 were damaging competing crops like soy beans. No one seemed to make the connection that the one thing less predictable than markets is weather in a warming world. Nor that the climate impact of expanding palm oil plantations is likely to make weather patterns more extreme, volatile and even less predictable.

Palm oil and many other commodities like fossil fuels demonstrate perfectly the rising concern with a flaw in something around which the economy trustingly, and often unthinkingly, pivots – the price mechanism.

A price needs to contain enough information for someone to decide whether or not it’s a good idea to buy or sell a product. Narrowly that means it should include likely risks to the investor, or purchaser. More broadly, to guarantee that the economy is functioning for the general public good, the price needs to include realistic assessments of social and environmental costs. Because this practically never happens, we have an economy that cannot, by design, be sustainable or deliver optimal social outcomes.

When, a few years ago, a company set up to exploit the Phulbari coal fields in Bangladesh raised millions in the City of London, its investor prospectus - despite being hundreds of pages long - failed to mention climate change once. That might reasonably be considered an important oversight both for the investors and low-lying Bangladesh, especially as much of the power generated by burning the coal was to be exported and not even used in the country.

An obvious, and outstanding corrective is for the price of commodities to include proper assessments of both risk and social and environmental costs. More straightforwardly, there is a case for regulation.

Whereas European and American companies can be prosecuted for importing illegal timber, no similar legislation covers the trade in land forcibly appropriated from communities, nor the commodities grown on it, like palm oil, rubber and sugarcane. Investors can profit from land grabbing because there are virtually no rules to stop them.

Global Witness revealed, for example, how rubber companies linked to land grabbing in Cambodia and Laos were also backed by, among others, the bank behind the GAR bond issue, Credit Suisse.

Unless prices reflect real costs and risks, and until regulation forces responsibility, commodity markets will fail and people will suffer as pressure on land and resources grows globally.