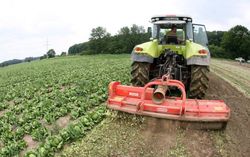 (Translation from Portuguese by GRAIN)

The peasants of Malema, Nampula Province, challenged the way the project is being implemented at a public consultation on the master plan for ProSavana.

"ProSavana is unclear. The information we have from Brazil where a similar program has been implemented is not encouraging. We know that many Brazilians lost their land and became landless," said Julius Cornelius, one of the participants in the meeting.

The peasants also criticised the lack of protections of their rights over their lands, noting that ProSavana is only concerned with protecting the rights of large-scale producers.

The peasants at the conslutations also questioned the type of assistance that farmers will receive under ProSavana.

A press statement sent to Lusa by the Ministry of Agriculture and Food Security states that the public consultations on ProSavana aim to present to and discuss with stakeholders the proposed strategies for the development of agriculture in the Nacala corridor.

ProSavana will operate in 19 districts of central and northern Mozambique and will support the development of monoculture crops for export. It raises fears of land grabbing and the destruction of cultures that are the source of survival for peasants in the region.