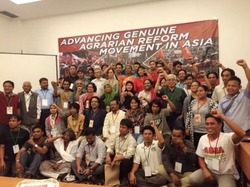 Peasant leaders and agrarian reform advocates from various countries in Asia join the land reform conference co-sponsored by PAN Asia Pacific with the Asian Peasant Coalition (APC) last 18-19 April in Jakarta, Indonesia.
The Asian Peasant Coalition (APC), in cooperation with PAN Asia Pacific (PANAP) and other groups, organized the conference to facilitate discussions on how to intensify the campaign and advocacy for genuine agrarian reform and food sovereignty across Asia. Participants also shared country-level lessons and experiences on people's resistance against landlessness, land grabbing and land-use and crop conversion in order to have a deeper understanding and unity on organizing and mobilizing the peasantry.
"The coming together of various peasant organizations under the genuine agrarian reform platform is an assertion of their rights and control of land and productive resources. We have learned from each other's struggles by exchanging ideas and experiences and engaging in various forms of partnership and cooperation. We acknowledge the peasant struggles and victories among the APC members in India, Bangladesh, Nepal, the Philippines, Indonesia, Pakistan, Sri Lanka, Mongolia and Malaysia," APC Chairperson Rafael Mariano said.
PANAP, meanwhile, introduced the "No Land, No Life!" campaign to the conference participants and invited them to join. "Land and resource grabbing violates the people's economic, social and cultural rights. Worse, the people's resistance and efforts to defend such rights are met with systematic and brutal violence by the land and resource grabbers. This has resulted in the gross and blatant violation of the political and civil rights of affected communities and activists," noted PANAP Executive Director Sarojeni Rengam.
During the conference, PANAP also held a workshop on land grabbing and human rights. The workshop focused on utilizing human rights instruments at the local and national to regional and global levels in order to hold land grabbers and rights violators accountable. Rengam explained that "with strong cooperation and solidarity at the regional and global levels, we continue to challenge the powerful forces that want to take away our lands and resources for private profits."
As the conference ended, the groups stressed that "for the struggling peasants in Asia, prospects are bright and the current situations offer great challenges to further advance the peasants' struggle and movement in Asia for genuine agrarian reform, food sovereignty and social change and to win more victories". ###