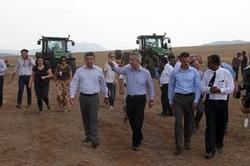 Oche Pole - In Dzumajlija there is not enough land, water and space to breed the cows announced by the Indian company Sahara Group. To ensure these conditions the company needs more money and realization of infrastructural facilities in state ownership

Does the agricultural combine "Dzumajlija" have the capacity for 20.000 cows? Is there enough land to produce fodder for the cows? How will they provide drinking water? Can 20,000 cows be brought in the country in 3 years? These are the questions asked by the inhabitants of Ovce Pole after the announcement of the Government and the Indian company Sahara Group that one of the largest farms in the Balkans will be in the area of the former combine Dzumajlija.

In the minds of agricultural experts there is a great dilemma of how it is possible to dispose such figures as never before there has been such a project not only in Macedonia but also in the surroundings.

Of the agricultural industrial combines in the socialism none had purchased more than 500 bullocks per year, says a source that in the 80s procured young cows for several agricultural cooperatives in Eastern Macedonia.

Such bombastic announcements are unrealistic for Boris Anakiev who has been studying the economic aspects of Macedonian agriculture for more than 60 years.

"I think this is ignorance of our terms, I do not know who from Macedonia participated in this project, but I think the figures are too high. Ovce Pole is very uncertain for good economic performance of agriculture", said Dr. Boris Anakiev, former professor at the Agricultural Faculty in Skopje.

The opposition has doubts, too. Lence Nikolovska, agronomist by profession, longtime agro-journalist and president of the Commission for Agriculture in the Macedonian Parliament thinks that a huge space is necessary to build such capacities.

"Everyone who knows at least something about agriculture knows that there are no theoretical chances to supply 20,000 cows in 3 years. Our largest farms have approximately 1,000 cows", adds Nikolovska.

Some senior officials of the former combine ZIK Ovce Pole are also suspicious. "Ovce Pole has neither had nor will have 20,000 cows, says a former director of ZIK Ovce Pole, who wanted to remain anonymous".

These are the opinions of experts, whether Subrata Roy will fulfill his promises and 20,000 cows from Western European countries will find their home in Ovce Pole remains to be seen in the first three years. The fact that a good portion of the area of the former combine Dzumajlija has already been ploughed gives a sign of hope.

However, as journalists we will try to warn the businessmen from India what problems can they face providing and breeding 20,000 cows in Ovce Pole.

The land is not sufficient for fodder production

The land of 6,000 hectares is too small for feeding 20,000 cows. In Macedonia, for breeding a dairy cow, it is necessary to have from 0.6 to 1 hectare agricultural area and that area to be irrigated or under a system.

Following that logic, to feed 20,000 cows, it is necessary for Macedonian conditions the farm to cover an area of at least 20,000 hectares, says Kiro Dokuzovski, last agro-economist who was Minister of Agriculture and one of the few, if not the only Minister of Agriculture, during whose mandate there were no agricultural strikes.

Other experts also have doubts about the capacity of Ovce Pole for feeding 20,000 cows.

"I do not like the number of cows with the area, in Ovce Pole under these conditions not 2 cows can be bred on 1 hectare, and they stated that 4 cows per hectare are sufficient, I think that it is not sustainable", said Anakiev.

These calculations of the Indian businessman leave doubt within local farmers. Petar Ristov, owner of a herd from Sveti Nikole says that these estimates are too optimistic and that in no place in Macedonia 1 dairy cow can be grown with an area of less than 6 decares.

He looks skeptical at the Indians’ calculation that with an area of ​​2 to 3 decares a cow can be fed, and the chances to provide food for a herd from a land and a few hectares not under irrigation, are small.

Ovce Pole is the largest granary in Macedonia after Pelagonija, with an area of about 20,000 hectares. But unlike Pelagonija, where average yields of grain exceed 3.5 tons of grain per hectare, in Ovce Pole the average is about 2.5 tons.

The diet of the cattle consists of two parts, a bulky part that is mostly covered with alfalfa, grass or corn silage and concentrate which is made from barley, corn and other ingredients. The concentrated part can be transported, but the bulky food is voluminous and very cheap to transport, so more than 90% of farmers provide it from their own sources.

"Voluminous foods such as hay, alfalfa silage has to be 100% provided from own sources, this is very cheap and not worth at all to be transported", explains Boris Anakiev.

If at least 7-8 kg concentrate is necessary for the daily diet of a dairy cow, where most prevalent is grain food such as barley and corn, then a cow annually takes about 3 tons of concentrate.

If it is known that in Ovce Pole the average yield is about 2.5 tons of grain and corn per hectare, then it takes about 1.2 hectares just to provide the fodder part of the cows’ food.

Apart from the concentrate, bulky part is to be further ensured, whether by feeding with alfalfa or corn silage preparation. One cow eats 20 to 30 kilograms of bulky food a day, which means 6 to 9 tons of voluminous food a year.

From one hectare under alfalfa or corn silage in Sveti Nikole one can obtain from 3 to 5 tons voluminous food, then to feed one cow a sown area of 2 hectares is necessary. When 1.2 hectares to provide concentrate is added to this, then in Ovce Pole for each cow it takes about 3 hectares of land.

Then mathematics shows that about 60,000 hectares are necessary for 20,000 cows, which is 10 times more than the initial area of ​​6,000 hectares taken by Sahara Group from the state.

According to sources in the HS Bregalnica, only about 5% of the agricultural area that was owned by AC Dzumajlija was irrigated for the past 2 years.

"The damage to the part of the HS Bregalnica in Ovce Pole is great. There are 8 pumping stations that no longer exist. Of the land which Dzumajlija operated under irrigation, I do not know whether there are 300 hectares, I think there is not so. From Crniliste to Karatmanovo there were 4 pumping stations and now there is not any", say experts at HS Bregalnica wanting to remain anonymous.

In order to provide water for irrigation of areas that are leased by the Indians, a complete reconstruction of the right main channel of HS Bregalnica is necessary.

This channel is about 100 kilometers long from the dam Kalimanci to the Ovce Pole village Karatmanovo. According to estimates of construction experts, it takes over 50 to 100 million Euros to reconstruct this channel.

"A renovation of a section of the main channel with a length of 7 km needs to be done and it costs about 8 million Euros. There is no theory to take this amount of water to Karatmanovo if all 100 kilometers of the right main channel are not reconstructed", say SCOOP sources from HS Bregalnica.

HS Bregalnica is the only hydro system in this part of the country that has some chances to deliver small amounts of water to Ovce Pole. The new HS Zletovica has 6 times less capacity than HS Bregalnica. In the second phase it is projected HS Zletovica to irrigate about 4,500 hectares in Probistip and Kratovo.

Ovce Pole does not have enough drinking water for these cows

An additional problem for the representatives of Sahara Group will be providing drinking water for the cows, complain farmers from Ovce Pole.

"A big problem is water supply for the dairy facilities. I have 60 goats and have problems to provide water for them, I have a borehole, but sometimes it has, sometimes it does not have any water", says Ristov.

For now the Sahara Group is looking for drinking water, which seems difficult to provide in Ovce Pole. They addressed the PE in Sveti Nikole, but they told them they had no installations to the village Lozovo.

There shall be no option for the Sahara Group farms to supply drinking water from HS Bregalnica as the first 50 kilometers of the right main channel are uncovered and in winter this channel can freeze.

For now the only option for providing safe drinking water for the cows the Indians will have in HS Zletovica. Director Mihail Cvetkov says that nobody has contacted him from the Sahara Group, but there has been an announcement that in the forthcoming period representatives of the company will seek a meeting with him.

"I do not know the quantities of water that the Sahara Group will require. We, as a hydro system, have the capacity to deliver 100 liters per second for water supply of Sveti Nikole. So far around 30% have been used, so we have free space to deliver certain amounts of water", says Cvetkov.

However, these amounts of water will be small because in the summer months water consumption in Sveti Nikole reaches 70 liters per second, so only 30 liters per second will remain free which is far from the needs of a farm with 20,000 cows.

It remains to be seen whether and how Sahara Group will solve this problem.

Problems with the capacity for cows quarantine storage

Quarantine storage of imported cattle can be another problem for the investors from India. According to the laws of the Republic of Macedonia, cattle imported from abroad must go into quarantine for 40 days before transferred to storage barns. When you empty the storage, it must be cleaned and disinfected, which as a process will take at least another 15 days to a month.

If the "Sahara" wants to bring in cattle, they must find a place for them.

According to the estimates of veterinarians from Eastern Macedonia, in this part of the country there is no capacity for quarantine storage of more than 200 cows.

And according to the pace and dynamics of importing cattle in Macedonia, 1,000 to 2,000 cows are to be imported per month.

In Macedonia so far there has been only one farm with more than 1,000 cows and there are few leisure facilities for quarantine storage of cows, say veterinarians from Stip who want to remain anonymous.