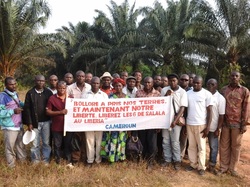 Global resistance to land grabs by Bolloré and Socfin

Peasant farmers deprived of their lands launch a series of occupations on Socfin’s plantations in Cameroon, Liberia, Cambodia and Côte d’Ivoire from now until the annual shareholder meetings of the Socfin group (27 May) and the Bolloré group (4 June).

“These lands were stolen from us. We come now to take them back and occupy them until an agreement with Bolloré and Socfin is reached.” Along with Michel Essonga, 6,000 Cameroonian peasants have had their forests destroyed and seen 40,000 ha of their land appropriated by Socapalm, a plantation controlled by Socfin. Tomorrow, the occupation of the plantation in Dibombarri marks the first in a series of actions that will take place in Cambodia next week, then in Liberia and Cote d’Ivoire. Brought together by the NGO ReAct, the peasants affected by the abuse of the same transnational corporation across the world have decided to unite and pressure the company to respect their rights. 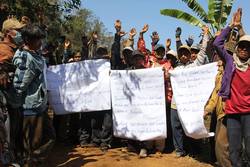 The Bolloré group is the biggest shareholder (39%) of Socfin, which has industrial oil palm and rubber plantations in these countries. Since 2008, the expansion of these plantations is ongoing. The area planted by the African subsidiaries of Socfin has gone from 87,303 ha in 2011 to 108,465 ha in 2014. That is a growth of 24% at the expense of local communities, which is adding to the tensions. In an attempt to resolve the conflicts, Bolloré agreed to embark on a negotiation process. The first round of discussions took place in Paris on 24 October 2014 with representatives of communities from these five countries. But Hubert Fabri and Philippe Traux de Wardin, long-time Belgian shareholders of Socfin, rebuffed this move to appease the situation. They only recognise government authorities as interlocutors, and refuse to dialogue with the communities. “They take advantage of the widespread corruption that plagues public institutions in our countries,” explains Ange Tchrouin Saré, president of the Union of Cleared Out Villages, victims of the Socfin plantations in Cote d’Ivoire (see letter to Socfin in annex). The Bolloré group finally changed its mind and aligned itself with the hard-line position of the Belgians. 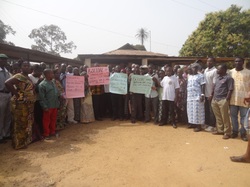 “The non-respect of promises made during the meeting with the Bolloré group in October 2014 has exacerbated the frustrations of local people,” Neth Prack in Cambodia added. “But we are determined, and we will organise new actions in all our countries until our rights are recognised.”

International Alliance of Villages Affected by Socfin Plantations
Contact: Tchrouin Ange Saré
Responsible for communication with the Socfin and Bolloré groups
President of the Union of Cleared Out Villages (Côte d’Ivoire)
+ 225 48 40 04 09
[email protected]

A M. Hubert Fabri
President of the Socfin Group

We, the Alliance of Villages Affected by Socfin-Bolloré Plantations, appeal to you personally with regard to the letter that was sent to you on 10 February 2015 concerning the conflicts between villagers and the plantations that you control.

We would like to understand the reasons for your silence. Do you consider these local conflicts unimportant, to the point that you would deny us a chance to be heard, despite our sincere will to find a solution that is acceptable to both parties? Our organisations represent thousands of people affected by a lack of access to their lands due to the existence of your plantations in five countries. These organisations were born of painstaking work to inventorise the problems affecting each village and to unite local leaders interested in working together to find a definitive solution to this conflict which has been going on for many years in our different countries.

We know that the plantation managers generally prefer to deal with traditional chiefs and locally elected officials. You are aware that many of these people are, unfortunately, victims of the widespread corruption which plagues our public institutions, as documented through many international studies. Not all local leaders are corrupted, of course. Some are members of the organisations that form our Alliance. But this general situation has until now prevented conflict resolution through platforms where dialogue can take place.

To move things forward and to fight the many injustices that local people feel themselves victims of since years, the inhabitants of villages around the plantations have created local and national organisations. As it struck us that our situation was similar to what was happening in Sierra Leone and Cambodia, we created an international alliance in order to speak with one voice to Socfin and the Bolloré group at the highest level.

We feel that negotiation is the only reasonable way forward, and we appeal to you once again to open up this path. The non-respect of promises made during the meeting with the Bolloré Group in October 2014 has exacerbated the frustrations of the local people who we represent and who only aspire to peace and justice. Please know that we are determined to go as far as necessary to have our rights recognised. We will organise new collective actions in all our countries until you demonstrate a will to open up to dialogue and find joint solutions with us. We will act responsibly to avoid violence and things getting out of hand. However, if such events do take place, you will be clearly responsible for it.

We wish to remind you of our first demand expressed last 24 October: the setting up of a tripartite assessment of land conflicts, with the support of an independent expert. Our starting point was that it is important to come to an agreement on what the problems are, in order to find solutions to them. We regret that you don’t seem to share this view, which we consider a matter of common sense which both the Bolloré Group and the representatives of the Alliance managed to share. We remain, nonetheless, open to hear your alternative proposals.

In any case, we wish to still leave you time to reflect until the end of this month. Beyond that, we will be forced to launch actions in each of our countries to make this conflict, which we do not know how to resolve together, public. We plan to organise one action in each country each week leading up to your general shareholders meeting as well as that of the Bolloré Group. We will do what is necessary with partner NGOs around the world to give these actions the greatest visibility possible. We therefore ask you to consider this letter as a forewarning.

Do know that we sincerely regret to have reached this point. In order to find sustainable and definitive solutions together, we would be honoured to count on your personal attention to this matter so that we may advance in the road to dialogue. In the hope of hearing from you, please accept our distinguished greetings.