Note from the editor: In April 2015, Agri Investor reported that the Maine Public Employees’ Retirement System (MainePERS) approved a $200 million commitment to Teays River Investments and that Washington State Investment Board will be voting on a similar $300 million commitment, which would take WSIB's agri exposure to $1.1 billion, as part of its $1.4 billion tangible assets programme. According to Agri Investor: "Teays River was established in 2009 initially as an investment fund with investment from TIAA-CREF, Teacher Retirement System of Texas (TRS) and Swedish pension AP Fonden 2 totaling $903 million. But it was re-structured into a company to reflect the long-term investment wishes of the investors and is now a co-investment structure. ... It also has a sister fund called Blue Road Capital which recently raised $30 million from New Mexico Educational Retirement Board, which invests into vertically-integrated agriculture assets." 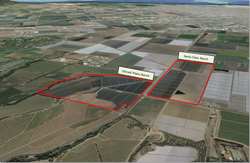 Teays River Investments, which has TIAA-CREF and AP2 as investors, purchased its "Oxnard Plains" and "Santa Clara Plains" holdings in California, US for an average $76,054 per acre in 2010 and 2011 (Photo: Granite Peak Partners)
Farmland Intelligencer Blog | 22 August 2014

The first hints of how California’s deepening water shortage may play out in the agricultural land market are starting to emerge.

Under the agreement, which is subject to a diligence review, buyer Gladstone Land Corp. (Nasdaq: LAND), a publicly traded berry cropland fund, will pay Teays River $74,096 per acre or $24.6 million for the adjacent properties. That’s 2.6% under the $25.25 million Teays River paid in 2010 and 2011 for the parcels. The price decline is relatively modest. But it’s unusual since cropland values have generally risen over the period. California irrigated cropland values are up an average 9% since 2011, according to U.S. Dept. of Agriculture survey data.

Richard Halderman, CEO of Zionsville, Ind.-based Teays River didn’t return a request to comment on the rationale for selling the holding.

Ventura County is suffering along with the rest of California from an extraordinary four-year drought. The lack of surface water for irrigation has made the problem worse, forcing growers to rely more heavily on wells for crop irrigation, which is encouraging saltwater intrusion into the underground water supply. In April, the local groundwater management agency adopted an emergency rule that dramatically affects farming operations and has the potential to influence land and lease values. This month, growers were required to trim their annual irrigation well pumping by 25%, with potential further cuts in February and August of 2015.

Local market participants say water concerns are affecting land values. A broker familiar with the Teays River sale says that pricing on the deal is “a lot higher” than he initially expected.

There is significant uncertainty over how the water shortage and deteriorating water quality issues will be resolved in Ventura County. “The water agencies will be tightening up rationing, and really monitoring what is getting pumped,” observes appraiser David Hamel in Santa Maria.

The prospect of further water restrictions has pushed cropland values down 10% to 20% since the beginning of the year, estimates a local broker.

Teays River Investments purchased its "Oxnard Plains" and "Santa Clara Plains" holdings for an average $76,054 per acre in 2010 and 2011. Worries over a four-year-old drought and uncertainty over irrigation limits and water costs have prompted an estimated 10% to 20% decline in area cropland values since the start of the year. Image: Granite Peak Partners

Teays River Investments originally paid $80,316 per acre or $13 million in February 2010 for the 162-acre “Oxnard Plains” tract, which includes a 25-acre knoll and seven acres taken up by a seasonal creek.The tract was part of the investment manager’s acquisition of PurePak, an Oxnard, Calif., grower-packer-shipper of organically grown strawberries and more than 30 different vegetables.

Teays River changed the name to Pacific Ridge Farms, and wound down the company’s fresh produce operation in 2012 to focus on frozen produce. The Oxnard Plains farm has been leased for growing strawberries, grape tomatoes and artichokes, according to a contact familiar with the property. Looking back, Teays River appears to have overpaid $10,000 to $15,000 per acre for this parcel, based on comparable sales.

In October 2011, Teays River bought an adjacent higher quality 169-acre “Santa Clara Plains” parcel for $76,054 per acre or $12.25 million. This property is leased for strawberry production.

Cash rents for top-quality strawberry ground range from $3,300 to $3,600 per acre, says Michael Graham, an analyst with the Ventura County Assessor’s Office. Vegetable crop rents average $2,500 per acre, depending on the crop, if the land can be triple-cropped, and if good quality irrigation water is available.

Strawberry growers have lost money for the past two years due to rising production and a lack of adverse weather that disrupts supplies and boost prices. “With the money losing ways of the strawberry guys, I would think rents are going to come back down again,” says Ben Faber, a Univ. of California Cooperative Extension farm advisor for Ventura County.

Teays River brought in a new tenant on the properties and struck a three-year lease, so the new lease rates haven’t yet been tested on whether they are sustainable.

Mr. Halderman launched Teays River Investments in 2007 through sponsorship from Ospraie Special Opportunities fund. The firm raised $903 million between 2009 and 2012 to invest in farmland and agribusinesses. Investors include New York retirement fund sponsor TIAA-CREF, the Teacher Retirement System of Texas and the Second Swedish National Pension Fund known as AP2.

In addition to farmland holdings, Teays River investments include an estimated $150 million for California table grape grower and distributor Steveco Inc., and $250 million in a leveraged buyout of Aurora Dairy Group, an Aurora, Colo. integrated organic dairy producer and processor—both purchased in 2011. Aurora manages some 9,600 acres of pasture land and more than 22,000 dairy cows in Colorado and Texas. The acquisition was aimed at complementing Teays’ dairy farm investments in Texas and other states.

Benjamin Zaitz, co-founder and chairman of Teays River Investments, is also on the management team of Silverpeak Growth Fund an Aspen, Colo.-based venture seeking to make vertically integrated investments in growing, processing and selling marijuana for recreational and medical use.