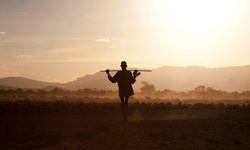 Ethiopia has long faced criticism for forcibly relocating tens of thousands of people from their ancestral homes. (Photo: Siegfried Modola/Reuter)
The Guardian | 14 April 2015

The east African country has long faced criticism for forcibly relocating tens of thousands of people from their ancestral homes to make way for large scale commercial agriculture, often benefiting foreign investors. Those moved to purpose-built communes are allegedly no longer able to farm or access education, healthcare and other basic services.

They intimidated us, we did not move – this is our land, how do we move?

The victims of land grabbing and displacement are given a rare voice in We Say the Land is Not Yours: Breaking the Silence against Forced Displacement in Ethiopia, a report from the California-based thinktank the Oakland Institute.

Some of the interviewees still live in Ethiopia, while others have sought political asylum abroad, and all remain anonymous for their own safety.

‘My village refused to move so they forced us with gunshots’

“My village refused to move,” says one, from the community of Gambella. “So they forced us with gunshots. Even though they intimidated us, we did not move – this is our land, how do we move? They wanted our land because our land is the most fertile and has access to water. So the land was promised to a national investor.

“Last year, we had to move. The promises of food and other social services made by the government have not been fulfilled. The government gets money from donors but it is not transferred to the communities.”

The land grab is not only for agriculture, the interviewee claims, but the community has also seen minerals and gold being mined and exported. “We have no power to resist. We need support. In the villages, they promised us tractors to help us cultivate. If money is given to the government for this purpose, we don’t know how it is used.

“The government receives money from donors, but they fill their pockets and farmers die of hunger.”

Opposition will not be tolerated

Opposition to the scheme is not tolerated, according to the witness. “People are intimidated – we are forced to say positive things about villagisation, but really we refuse to accept the programme. If you challenge, the government calls you the mastermind of conflict.

“One of the government officials was opposed to the government. They wanted to put him in prison. He escaped and is now in Kenya, living as a political refugee.”

The government receives money from donors, but they fill their pockets and farmers die of hunger.

Agriculture makes up nearly half the GDP of Ethiopia, where four in five people live in rural areas. But since the mid-2000s, the government has awarded millions of hectares of land to foreign investors. The commune development programme, which aims to move 1.5 million rural families from their land to new “model” villages across the country, has faced allegations of violent evictions, political coercion, intimidation, imprisonment, rapes, beatings and disappearances.

A witness from Benishangul laments: “This is not development. Investors are destroying our lands and environment. There is no school, [no] food security, and they destroy wild fruits. Bamboo is the life of people. It is used for food, for cattle, for our beds, homes, firewood, everything. But the investors destroy it. They destroy our forests.

“This is not the way for development. They do not cultivate the land for the people. They grow sorghum, maize, sesame, but all is exported, leaving none for the people.”

“We are scared that the highlanders will come and destroy our way of life, culture, and pasture land. What will we do? The government says we can keep two to three cattle, but this is a challenge. Our life is based on cattle, and we cannot change overnight. I keep cows, oxen, sheep, goats – where do we go?

“The investors take land in the Omo Valley. They clear all land, choose the best place where trees are, leaving the area open. They say it is for development, but they are clearing the forests. I wonder how to reconcile development with forest destruction.”

Such accounts threaten to dent the image of Ethiopia, a darling of the development community that has enjoyed double digit economic growth for the best part of a decade. The government has been criticised for brooking little opposition, clamping down on civil society activism and jailing more journalists than any country in Africa, except its neighbour Eritrea.

‘Basic human rights are not being upheld’

A government employee told the researchers: “I want the world to know that the government system at the federal level does not give attention to the local community.

“There are three dynamics that linger in my mind that explain today’s Ethiopia: villagisation, violent conflict, and investment. They are intertwined and interrelated. It is hard for outsiders to know what leads to what. When people are free, they talk. When they are afraid of repercussion, they stop.”

Critics have claimed that British aid to Ethiopia’s promotion of basic services programme were being used by the Ethiopian government to help fund the villagisation programme. But last month the Department for International Development announced that it was ending the contributions because of Ethiopia’s “growing success”.

Anuradha Mittal, executive director of the Oakland Institute, who conducted the interviews in 2014 and 2015, said: “The context in which we release this report is one of torture, oppression, and silencing. A development strategy without ensuring its citizens freedom of speech and expression is not a development strategy but a scheme to benefit the ruling elites.

“Those basic human rights are not being upheld in Ethiopia. It is therefore urgent to make voices of those impacted heard.”