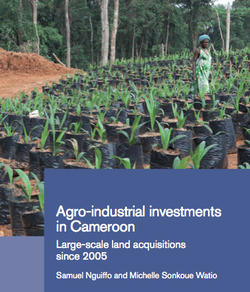 In recent years, Cameroon has been approached by growing numbers of local and international investors wanting to acquire arable land for large-scale agro-industrial operations. This seems to be regarded as a positive phenomenon in the country, as it is encouraged by the government and is expected to boost the nation’s balance of payments.

In order to make a realistic assessment of the situation, this study takes a closer look at large-scale land acquisitions by the agro-industrial sector since 2005. Examining the legal framework and the practical implications of these land acquisitions, it shows that there is a risk that these investments will affect the long-term capacity of communities to preserve their traditional way of living. Their territories are being substantially reduced, their ecological environment and social stability are threatened, and the situation is further exacerbated by the lack of transparency in the allocation process. The authors propose several possible solutions that will serve the long-term interests of both local populations and agro-industrial companies.