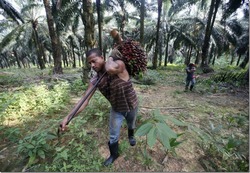 DAVAO CITY -- Mindanao authorities are looking at developing about a million hectares for oil palm farming with about a third of the total area in the Caraga Region.

The Mindanao Development Authority (MinDA), through Public Affairs Division Chief Romeo M. Montenegro, said Caraga can become the center of oil palm production in Mindanao as studies show the climate and soil condition in parts of the region, particularly in the Agusan provinces, are ideal for both nurseries and farms.

About 60,000 hectares in Mindanao have so far been developed for oil palm production, a large portion of which are in Caraga and some in the Autonomous Region in Muslim Mindanao, according to MinDA data.

The industry has become “exciting”, said Mr. Montenegro, as nine companies from Malaysia and Indonesia, the two biggest oil palm producers and exporters, have signaled their intention to invest.

In Davao City, oil palm projects are being eyed in the remote agricultural districts, particularly in Marilog, including some areas covered by Certificates of Ancestral Domain held by various indigenous communities.

The Philippine Palm Oil Development Council is also pushing for the expansion of the industry in Mindanao, saying it can potentially match the importance of coconut, the country’s top agricultural export commodity.

Peter T. Lavina, a member of the Philippine Palm Oil Development Council, told BusinessWorld the vision is for the country to host refineries once it produces enough raw oil and eventually achieve self-sustainabilty on the product.

Based on IndexMundi, an international trade tracking portal, the Philippines imported about 300,000 metric tons last year.

World market palm oil prices as of April 2, according to the Malaysian Palm Oil Council, stood at 2,166 ringgit per metric ton or about $598.

However, several environmental groups, among them the World Wildlife Fund, have cited the threat to rain forests if large plantations are established.