World Bank funding 'shrouded in darkness and riddled with abuse' 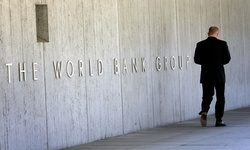 NGOs have launched a collective call for the the branch of the World Bank that deals with private companies to ‘completely overhaul’ its approach to funding. (Photo: Win McNamee/Getty Images)
Guardian | 2 April 2015

World Bank funding 'shrouded in darkness and riddled with abuse'

The World Bank must “completely overhaul” a funding model built on heavy investment in financial companies that leaves the organisation with little control over where its money ends up, a group of NGOs has warned.

The bank’s private sector arm, the International Finance Corporation (IFC), invested $36bn (£24.5bn) in financial companies including hedge funds, private equity firms and commercial banks between 2009 and 2013, according to a report released on Thursday. The study, prepared by NGOs including Oxfam, Global Witness and the Bretton Woods Project, said these funds would be better used to pursue development targets in areas such as education and public health.

The report noted that, between 2009 and 2013, the IFC lent three times more to financial intermediaries than education programmes in the developing world.

Over the past decade, there has been a threefold rise in the percentage of World Bank Group funding that goes to the IFC (pdf). In 2000, just 13% of the group’s total spending was allocated to the IFC, but by 2013 that figure had soared to 35%, a trend that the report describes as “out of control”.

“The IFC has grown so rapidly and [become] so big that it now forms half of the World Bank Group,” said Kate Geary, Oxfam’s land rights policy researcher.

“The IFC is giving its money to a third party, and then the third party lends that on again,” she explained, noting that 62% of the IFC’s total portfolio is invested in financial companies. “Through that process the IFC is losing control of the way that money is spent.”

Several projects funded by the IFC have come under fire for their alleged implication in human rights abuses, the report said, noting that: “Instead of development benefits, local communities have endured displacement, loss of livelihoods, fear, violence, criminalisation and repression.”

An IFC spokeswoman said: “The IFC’s work through financial intermediaries provides much-needed access to finance for millions of individuals and micro, small, and medium enterprises that we would never be able to reach directly. Our work with private equity funds brings both capital and expertise to fast-growing companies, and mobilises money for renewable energy, infrastructure and other projects in some of the world’s poorest countries.”

NGOs have urged the IFC to make its contracts with private lenders public and to allow third-party vetting of projects.

Natalie Bugalski, legal director of Inclusive Development International and a co-author of the report, said: “IFC’s lending to third parties is now so huge, its portfolio so shrouded in darkness and riddled with abuse, that it needs to completely overhaul this lending model.”

The opaque nature of the IFC’s lending has been compounded by a lack of communication, added Nicolas Mombrial, head of Oxfam’s Washington DC office. “Because public information from the IFC is so meagre – whether by design or ignorance – we fear such projects are just the tip of the iceberg,” he said.

In 2009, the IFC invested $70m in a Honduran bank, Banco Ficohsa, which in turn loaned $15m to a local agribusiness company, Corporación Dinant. The latter has been accused of carrying out violence against farmers on oil palm plantations in the fertile Bajo Aguán valley in north Honduras.

Responding to the allegations in a letter published in the Guardian last year, Dinant denied any role in human rights violations.

The World Bank’s independent monitoring group, known as the Compliance Advisor Ombudsman (CAO), said in a 2014 report that the “IFC took insufficient measures to identify activities where Ficohsa was exposed to environmental and social risk”.

The IFC loaned more than $25m to a Vietnamese investment group that forced about 15,000 Cambodians from their land to make way for rubber, sugar cane and palm oil plantations, according to the report.

The study said the bank has taken positive steps to improve how it monitors lending to financial intermediaries, including “streamlining its risk assessment, forming a new committee to assess high risk projects, and pledging to give more environmental and social risks the same weight as financial or credit risks”.

In March, the World Bank president Jim Yong Kim admitted shortcomings in the bank’s policy towards preventing and monitoring forced resettlement in the projects that it funds. “We must and will do better,” he said.

On Thursday, the IFC will defend its environmental and social risk policies at a board meeting ahead of the World Bank’s annual Spring meeting on 17 April.

Other NGOs involved in the production of the report include Madre Selva, Nisgua, the Research Collective – PSA, the Bank Information Centre, Urgewald and Equitable Cambodia.