European Union is one of the world’s largest importers of agricultural goods from illegally deforested land, a report published yesterday (17 March) by Fern, a green NGO, has found. 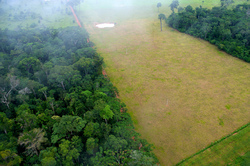 An aerial photo showing the contrast between forest and agricultural landscapes near Rio Branco, Acre, Brazil.(Photo: Kate Evans/CIFOR).
In 2012, EU member states imported more than €6 billion in soy, leather, beef, and palm oil coming from tropical forests turned agricultural land, the report said.
The Netherlands, Germany, the UK, Italy, and France are “the largest importers of these illegally sourced commodities”, consuming 63%.
Palm oil is largely bought by Germany and the Netherlands, while the leather is mostly sold to Italy in order to satisfy the fashion industry's high demand. France is the EU state that consumes most of the soy imports. Meanwhile, the UK tops the list in buying high quantities of beef.
“It is well documented that the EU has been leading the world in imports of products which drive deforestation,” said Saskia Ozinga, Campaigns Coordinator at Fern.
“But this is the first time that we have data showing that much of this deforestation is also illegal.”
MEP Catherine Bearder (Liberal Democrats) said the report’s findings were “shocking”, but “shows the need for the UK to end its complicity with illegal deforestation”.
The most affected areas
According to the report, more than half of the illegally stripped land is in Brazil and another quarter is located in Indonesia. Oil palm plantations “are the largest drivers of deforestation” in those regions, said Fern.
“In many cases, entire developments are illegal because the right to clear land does not exist or was illegally issued or obtained,” the Fern report stated
But even when permits to clear the land are legitimate, companies would either fail to pay to the local community, or cut more forest than permitted by contract.
“In addition to the environmental impact, this rampant illegality is driving corruption, and leading to violence, human rights abuses, and loss of revenues.”
Large areas of tropical forests are also being lost in Cameroon, Cambodia, the Republic of Congo, Gabon, Laos, and Papua New Guinea.
Appeal for reforms
"An EU Action Plan is desperately needed to reduce deforestation and ensure that all imports into Europe are legally and sustainably sourced," Bearder said.
Fern has called on the EU to open a dialogue and push for reforms in the affected regions. It acknowledged that while many companies are ready to commit to zero deforestation, it will be difficult to meet such standards without strong government laws in place.
“To keep trees standing requires addressing the pressures driving deforestation,” said Hannah Mowat, a Fern campaigner.
“The EU can instigate law reform in supply countries by bringing together the relevant governments, industries and civil society groups to not only reduce deforestation, but improve governance and strengthen indigenous and local peoples’ tenure rights,” Ozinga concluded.