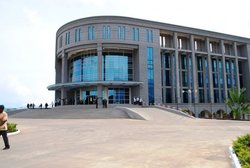 A three-day workshop that included farmers' organisations ended in Yaounde on Friday, March 13, 2015.

Organised by the Central African Sub-Regional Platform of Farmers' Organisations (PROPAC) in partnership with the Parliament of the Economic and Monetary Community of Central Africa (CEMAC), the conference that also saw the attendance of experts from several development organisations, enabled the parliamentarians and representatives of farmers' organisation to define joint actions to promote sustainable investments.

In the presence of the CEMAC Parliament's President, Vincent Mavoungou Bouyou, discussions centred on investment models that could be more profitable as well as their legal and policy aspects. Contract Farming and Large-scale Farming emerged as the two principal models to upgrade peasant agriculture to meaningful production levels. In her lecture, the Programme Officer for East and Southern Africa of the International Fund for Agricultural Development (IFAD), Marieclaire Colaiacomo, said in Contract Farming, the commodity buyer provides inputs, seeds and loans to the farmer while the latter has better access to markets and prices, knowledge of quantities needed by the buyer as well as technology transfer or technical assistance to improve his yields. To that effect, the expert presented a legal guide on Contract Farming.

For the President of PROPAC, Elisabeth Atangana, the workshop was timely as Cameroon which is transforming economically, has the need to align to globalisation. Confident that the workshop strengthened the capacities of parliamentarians and farmers' organisations on the principles of responsible investments such as mutually-beneficial public-private partnerships and funding, she however cautioned that hurdles to tackle would be ensuring transparency in negotiations and edifying farmers on the advantages and inconveniences in establishing partnerships. Given that profits are more in favour of investors and to the detriment of communities, she posited that it was important for parliamentarians to master existing laws and propose their amendments while farmers must equally master the laws, frameworks and codes so that when there is negotiation, they will better manoeuvre the protection and advancement of their interests.