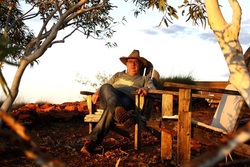 Harold Mitchell on Yougawalla station.
Mitchell to sell 49pc of cattle stake
ADVERTISING doyen Harold Mitchell will sell up to 49 per cent of his cattle station empire in Western Australia to boost the growth of an already-growing business, with expectations the sale could fetch about $40 million.
Mr Mitchell bought into the cattle station business Yougawalla Pastoral Company in 2008 along with former Seven West Media director Doug Flynn and the Sale family.

The company survived the detrimental live export ban, purchased further land holdings during the trough and has grown from 1000 head of cattle to its current 45,000 head.

Mr Mitchell confirmed that a stake in the business, which owns 850,000 hectares and leases another 560,000 hectares in Western Australia's East Kimberley, would now be offered for sale.

"We haven't really encouraged anything here but we have to at least respond to the interest," Mr Mitchell said.

"The timing is right, though, because we are looking to take the business from 45,000 head to 85,000 head and that is probably a little too hard to do all by myself."

He has appointed KPMG and ANZ to handle the transaction. The bank and professional services firm have been fielding strong interest from offshore for beef production and farmland driven by a depreciating Australian dollar, strong beef prices and growing demand from China.

Australia's cattle herd has contracted in the last 18 months and Meat and Livestock Australia estimates it will take another five years to build supply back up which bodes well for operators who are in good financial positions.

Mr Mitchell admitted he has been very lucky picking the cycle.

"All luck. I have been as lucky in this as I was in the advertising business," he said.

Mr Mitchell's decision to sell part of the business, while maintaining a majority share and management, also comes just as the Terra Firma-backed Consolidated Pastoral company is being advised by Barclays on possible capital partners or partial sale of its business.

In the past 12 months there has been renewed interest in Top End cattle stations.