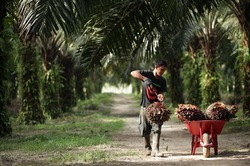 The showdown between Golden Agri-Resources and FPP is just one of an estimated 4,000 land-related conflicts between palm oil producers and local communities recorded by Indonesia's government in the world's biggest palm oil producing nation.
Indonesia palm oil battle pits farmers against big plantations

Rome - An investigation into one of Indonesia's major palm oil producer's plans to expand its plantations has turned into a test case for agribusiness firms eyeing indigenous land and campaigners fighting for the land rights of local people.

Golden Agri-Resources, a Singapore-based firm, operates palm oil plantations covering about 250,000 hectares in Indonesia and wants to expand in 18 of its subsidiaries in Indonesia's Kalimantan, on the island of Borneo.

Rights groups accuse the company of taking land from local people without free and informed consent -- breaching sustainability guidelines which require residents to approve land deals.
The showdown is just one of an estimated 4,000 land-related conflicts between palm oil producers and local communities recorded by Indonesia's government in the world's biggest palm oil producing nation.

This particular fight is happening largely behind closed doors among members of the Complaints Panel of the Roundtable on Sustainable Palm Oil (RSPO), in what campaigners consider a crucial test for the monitoring body.

This week, the RSPO decided that a complaint about unfair displacement of people due to Golden Agri-Resources' operations had merits to go ahead. Activists consider it a victory.

"Not a single person who surrendered their land had a copy of the contract they signed," Marcus Colchester, a campaigner from the Forest Peoples Programme (FPP) advocacy group, told the Thomson Reuters Foundation by phone from London.

The row broke out last November after it emerged that more than 5,000 small farmers were moved off their land in one of the concessions the Forest Peoples Programme studied.

Colchester believes this number "represents just the tip of the iceberg".

Golden Agri-Resources did not respond to requests for an interview, but issued a statement saying it would "continue to work constructively with the FPP to resolve the issues".

The company said it had stopped planting on any new land, and therefore was not displacing any farmers while the RSPO investigation continued.

"All new plantings have been halted since 3 November 2014," Golden Agri-Resources said in a statement on Thursday. "We will keep the situation under constant review as this process continues."

The complaint at the RSPO alleges that many residents left their land believing they had signed a short lease with the company, rather than having relinquished it altogether.

The oil is used in products ranging from biofuel to cooking oil and cosmetics. Practices at plantations such as clearing land through burning have depleted forests and caused smoke haze across Southeast Asia.

Of the world's total palm oil production, 85 percent comes from Indonesia and Malaysia, according to the RSPO.