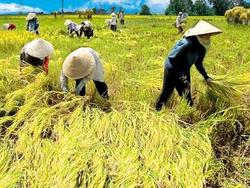 Over the past few years, Tu's company has worked with many Japanese investors in agricultural projects in Vietnam, especially those in cow growing and vegetable planting. "One of the major reasons for Japanese investors to become more interested in Vietnamese agriculture is their projects are suitable for Vietnam's soil and climate conditions,"said Tu.

Information from Japanese Embassy in Vietnam showed the two countries are developing a project"Medium and Long-term Visions In Agricultural Cooperation"which is expected to be approved in mid- 2015, reported Bao Dau Tu.

In the first two months of 2015, Japan ranked third among foreign direct investment (FDI) contributors to Vietnam with 169. 83 million U.S. dollars, accounting for 14.2 percent of total Vietnam's FDI, according to MPI.

A survey released by Japan External Trade Organization (JETRO) in early February showed that 66 percent of Japanese companies hope to expand operation in Vietnam and considered Vietnam as an important investment destination.