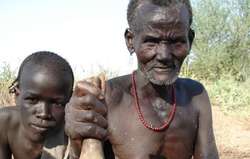 The Kwegu in Ethiopia's Lower Omo Valley are starving because of the destruction of their forest and the slow death of the Omo river. Photo: Survival International
Ethiopia: tribe starves as dam and land grabs dry up river

Survival International, the global movement for tribal peoples’ rights, has received disturbing reports that the smallest and most vulnerable tribe in Ethiopia’s Lower Omo Valley is starving, as a result of the destruction of their forest and the slow death of the river on which they depend.

The Kwegu, who number just 1,000, hunt, fish and grow crops along the banks of the Omo River. But the massive Gibe III dam and associated large-scale irrigation for commercial plantations on tribal land will stop the Omo River’s floods, and destroy the fish stocks on which the Kwegu depend. Recent satellite images show that the Ethiopian government has started to fill the Gibe III dam reservoir.

In disturbing video testimonies filmed in 2012 during the clearing of their land, a Kwegu man said, “Maybe we will die. The river keeps us alive. If they take the water out of the riverbed where will we live? If the fish are gone what will we feed the children?”

Watch the full video testimonies here (the identity of the tribespeople has been disguised to avoid persecution).

Many now report that their beehives have been destroyed by the government’s Kuraz sugar plantations and that their sorghum crops along the Omo riverbank have failed because there has been no flood. The Kwegu have become dependent on food from neighboring tribes to survive.

There has been almost no consultation of the indigenous peoples of the Lower Omo Valley about these projects on their land, and resistance is met with brutal force and intimidation. Several tribes are being forcibly settled by the government in a process known as “villagization.”

A member of the Suri, a neighboring people to the Kwegu, told Survival earlier this week, “The government has told us to live in new houses but we don’t want to… They did not try to explain what they were doing or ask us what we wanted." 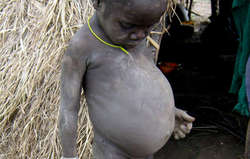 Kwegus children are going hungry because of the lack of fish and crops, and have become reliant on food from neighboring tribes. Photo: Survival International
Ethiopia is one of the largest recipients of USA, UK and German aid. DfID, the UK’s donor agency, recently announced it will stop funding a program which has been linked to the forced resettlement of tribes. However, it has not reduced the amount of its aid to Ethiopia and makes no reference to the resettlement program.

A report of a donor mission to the area in August 2014 by the Development Assistance Group – a consortium of the largest donors to Ethiopia including USA, the UK, Germany and the World Bank – has not been released, despite the growing humanitarian crisis in the Lower Omo.

Stephen Corry, Director of Survival, said today, "Donor agencies need to reform to ensure taxpayers’ money is not spent propping up governments responsible for evicting tribal peoples from their lands. DfID says its aid supports the poorest – yet it turns a blind eye to the many reports of human rights abuses in the Lower Omo, and continues to support an oppressive government hell bent on turning self-sufficient tribes into aid-dependent internal refugees.”