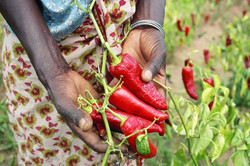 Initiatives like the G8 New Alliance are in fact aimed at multinational companies resources and bring about policy changes which will help them expand in Africa at the expense of small-scale food producers.
Is aid money benefiting small farmers in Africa – or big agribusiness companies?

We must stand up against trade agreements which give corporations new powers to grab land, monopolise seed distribution and benefit from an export-to-the-West model of growth.

It’s a good thing that the aid budget should be enshrined in law, but that aid money seems to have become increasingly about facilitating western multinationals in accessing and restructuring markets in countries in Africa, rather than aiding vulnerable communities. This is becoming especially apparent in the context of food production and agriculture.

Africa is seeing a new wave of colonialism as multinational corporations, aided by rich governments and financial institutions, vie to increase their control of land, seeds, water and other resources. The continent has been described as the ‘last frontier in global food and agricultural markets’ by the World Bank, and private sector and corporate investment is seen as both a good investment opportunity as well as the only way of boosting agricultural production and helping to lift people out of poverty.

The reality is that sustainable small-scale farmers produce over 70 per cent of the food consumed in Africa, on less than 15 per cent of the agricultural land available on the continent. Despite this, donors, development agencies and multilateral financial initiatives, like the New Alliance for Food Security and Nutrition (New Alliance) and the Alliance for a Green Revolution in Africa, continue to push a one-size-fits-all industrial model of agriculture and make exorbitant claims about their aims.
The New Alliance initiative, launched in 2012, aims to achieve ‘sustained and inclusive agricultural growth and raise 50 million people out of poverty over the next 10 years’.

What it doesn’t mention is that some of the projects it finances, such as agricultural growth corridors in Burkina Faso, Ghana, Malawi, Mozambique and Tanzania (which the UK’s Department for International Development (DfID) has spent almost £70 million financing), have been described as ‘likely to facilitate the appropriation of land and the displacement of small-scale farmers, while imposing high-input, industrial agriculture using hybrid and GM seed’.

DfID is currentlychannelling £600 million of aid money through the New Alliance to support agricultural development and improve food security in Africa.

This is nothing to do with helping Africa feed itself; it is about further empowering an already very powerful and bloated agribusiness sector. Clearly this needs to be challenged – to bring an end to the latest crusade for Africa’s resources. This means a radical reform of the aid system, which is currently doing more to entrench, than to break, corporate control.

It means standing up against a number of trade agreements currently being negotiated, which will give corporations new powers to grab land, monopolise seed distribution and benefit from an export-to-the-West model of growth. It means supporting women farmers, who have least control over the food system, in claiming their rights to land and food.

It means creating a more democratic food system based on the principles of agroecology (the science of sustainable farming as well as a political movement) and food sovereignty (the right of peoples to define their own food systems).

Agroecology can feed Africa by increasing food yields. But a food system is about much more than just food production. For a food system to work in the long-term and benefit all the people involved in the food chain – from the farmers to the consumers – as well as the environment, it needs to be democratically controlled and based on sustainable and equitable principles.

This is what agroecology is all about and the evidence in favour of it is now overwhelming. Not only can agroecology increase yields, but it has multiple positive knock-on effects by reducing the gender gap, increasing employment and income, improving health and nutrition, increasing biodiversity, and addressing the causes and consequences of climate change.

The current rules that govern our global food system are rigged in favour of corporate controlled agriculture. What we really need is for governments, donors and international institutions to radically shift from the current corporate-led approach to farming and instead support sustainable small-scale farming and agroecology. By supporting agroecology, governments can help to increase farmers’ democratic control of land, seeds, water and other resources thus creating a more sustainable, equitable and viable food system.

It is within a positive policy framework that agroecology, as a tool for food sovereignty, can best be supported. It is therefore essential that the UK and other donors do not pressure states receiving aid to commit to land, trade, seed and other agricultural policy reforms that risk the livelihoods and resilience of small-scale farmers and the food sovereignty of communities.
In this context, to help overcome the barriers faced by agroecology and sustainable small-scale agriculture, the governments of the UK and other aid donors should:
The UK government and other donors should play a key part in helping farmers across the continent use these solutions and others like them to truly transform their food system.

This article is adapted from the new report From the Roots Up: how agroecology can feed Africa.

*Ian Fitzpatrick is a researcher with Global Justice Now.