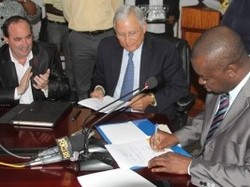 A convention of establishment of a major agro-industrial project was signed between the Ministry of Agriculture, Natural Resources and Rural Development (MARNDR), the « Société de développement des produits oléagineux » (SODEPOL SA) and « Huile de Palme d’Haiti » (HUPHASA SA). The SODEPOL-HUPHASA project is the result of a partnership between Haitians and Colombians investors and has two components.

The agricultural component, SODEPOL consists in introduce and develop large scale in Haiti the planting of the oil palm, which will take place in phases to eventually reach a planted area of 4,000 hectares of oil palm over the next 5 years in the Central Plateau area.

SODEPOL, intends to develop a new model of alliance with farmers who will allow the inclusion of small and medium planters that will become agricultural entrepreneurs. To facilitate the accession of the farmers in the project, SODEPOL planned a subsidy and loans scenario, which will alow to fund infrastructure such as access penetration roads, irrigation canals, drainage and soil preparation. his grant will also allow farmers to purchase and maintain their plantation of oil palms. The purchase of crops to farmers will be provided by the industrial component HUPHASA.

HUPHASA is the industrial component of the project which aims to establish, at first, a crude palm oil extraction plant, with a capacity of 15 tons per hour, which will buy all the crops of farmers at an agreed price. Crude palm oil will be exported to the international market and sold to companies specializing mainly in the production of edible oil. Secondly, in accordance with its vertical integration strategy, HUPHASA will establish a refinery for the production of vegetable oil dedicated to local consumption.

SODEPOL-HUPHASA is a vertically integrated project, which will promote national agricultural production in a new industry: the planting of oil palm. It will allow, among other things: the creation of over 4,000 jobs in the next 5 years; to contribute to improving the environment through reforestation; generate additional foreign exchange earnings through exports of crude palm oil and contribute to increased national wealth.