There are few products so ubiquitous as palm oil. You can find its derivatives in chocolate, shampoo, toothpaste, detergent, ice cream, floor polish and a host of other products filling supermarket shelves.

Extracted from the fruit of the tropically-grown oil palm tree (Elaeis guineensis), it has become so versatile and sought after that the growing economies of Indonesia and Malaysia, the world's two largest producers, make some $40bn a year from its production and export.

Given that by 2020 global demand for palm oil is expected to double and then triple by 2050, it is no wonder that other developing countries, especially in sub-Saharan West Africa where the tree originates, have been looking enviously at Southeast Asia and hoping to emulate that success.

But palm oil cultivation does not come cost-free. If not done sustainably, say conservationists, it can have disastrous consequences for people and the environment. In Indonesia, for example, it has played a major role in deforestation which has seen the loss of more than 6 million hectares of primary forest over the last 15 years.

Read the Calabar Declaration:
Members of communities affected by industrial monoculture oil palm plantations
and other organisations from Africa, Europe, the Americas and Asia
met in Nigeria in November 2013 to reaffirm opposition to land and forest grabs.


As rainforests are home to least half of this planet's species of plants, animals and insects, the negative impact on global biodiversity can only be imagined. In addition, indigenous communities are also destroyed as people who have lived happily off the forest's resources for generations, often do not own the land (at least not in a form recognised by governments, corporations and their lawyers) and are frequently displaced to make way for new plantations. 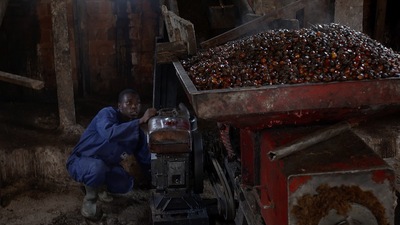 It is against this background that the central and West African state of Cameroon has been trying to get a palm oil industry off - or rather into - the ground. Its President Paul Biya, who has held office since 1982, has been looking for ways to give Cameroon's economy a boost.

His country is not as poverty-stricken as some on the continent. It has some modest oil resources and favourable conditions for agriculture and is comparatively stable politically, but it is not immune from many of the problems associated with developing nations, from chronically high unemployment and an inequitable distribution of income to corruption and inadequate public infrastructure. Cameroon is also over-reliant on imports, which makes it susceptible to rising prices and food insecurity. According to the UN, more than 40 percent of the population are living under the poverty line, while over one-third of its children are suffering from chronic malnutrition.

Palm oil then, would seem to offer good prospects for additional growth. The tree is native to the region and the climate is perfect for its cultivation. And of course, there are plenty of international agribusiness conglomerates looking for suitable places in West Africa in which to replicate the stellar profits enjoyed by the industry in Asia.

Thus it was, in 2010, that the Cameroonian government struck the outlines of a deal with a US-based enterprise called Herakles Farms, granting it exclusive use of a biodiversity hotspot in south-western Cameroon - an area covering 73,000 hectares of pristine forest and farmland - in which to start plantations. The company would benefit from some eye-wateringly generous tax breaks, but in return it promised to bring much needed development to the region - from jobs and schools, to hospitals and better roads.

But as revealed by this episode of People & Power, from filmmakers Hugh Hartford, Dan Boaden and reporter Nidhi Dutt, things did not quite turn out that way ...

By Nidhi Dutt and Daniel Boaden

"It's no good, you're going to have to get out and walk from here." The driver had nowhere else to go; we were completely enveloped by thick tree trunks and dense undergrowth.

Shutting the car doors behind us we set off on foot to Masaka Bima, a village deep in the forested southwest region of Cameroon. Inaccessible by car, the community that calls this area home is at the heart of a battle between an international agribusiness firm, Herakles Farms and national and international land rights law.

Trying to clear a path through the confusion is Macnight Ngwese from the Centre for Environment & Development (CED). He is leading a mapping programme in collaboration with local NGOs, SEFE and Nature Cameroon. They have been providing villagers with GPS devices to log their land and forest use. This information is vital in a grassroots battle to protect rights and livelihoods in one of the country's most remote areas.

We stop en route and Macnight unrolls one of his large maps, a patch of diagonal lines cover most of the document. That patch, he says, is the proposed plantation area. Macnight locates where we are and where we are going. Surrounding us on the map are a couple of key symbols. He points to one and says, "that is one of the few fishing spots in the area."

This map was created using data compiled from several villages in the area. Macnight continues,"what is instantly clear from the first set of results is that each community has a very large area of land use. People travel deep into the forest to collect herbs and spices, fish in rivers miles from their home, and hunt for food in similar pockets to neighbouring communities."

Macnight's last point is where the issue becomes particularly fraught. It is evident that there are large overlaps between land use by separate villages and communities. As the industrial agribusinesses move in, this land needs to be demarcated and free prior and informed consent (FPIC) sought. It is a complex procedure, requiring significant amounts of time and effort to ensure all voices are heard and all consent is given.

The data and justification for how this works in the case of Herakles Farms is not currently public but the results have raised tensions between villages. Although they share land, they do not always share the same opinions and working out who has the right to consent can be an arduous task.

Many of the people we spoke to were angry, believing their consent was not given, their voices never heard, and now their land is being unrightfully taken away. However, this is not to deny that others were much more positive about the potential benefits of agribusiness. The complex picture of land ownership is highlighted clearly on CED's map and the process of demarcation and land sale seeds deep concerns for the future.

As we arrive in Masaka Bima, the village chief, Philip Ngesa, greets us. We walk into the forest and on the way we pass a large billboard that features the words "Solar Power Plant" prominently at the top. The metal board, erected by another private company, promises electricity generated by small solar grids. The sign looks weathered and is rusting. Philip tells us it has been there for five years, beaming the promise of power to the village since an election campaign in the region. But the lights still have not been turned on in Masaka Bima.

"We've had many men come into our village to offer the prospect of jobs, money and schools. Some say they'll build roads but as of yet, none of this has come true. We want to be able to send our kids to school," Philip laments.

Cameroon's southwest region is ripe for development; it has oil, minerals and fertile land. It is called "Africa in miniature" because the range of climates and soil means that just about anything can be grown here.

Palm oil, the very crop Herakles Farms wants to grow on a massive scale, has been here for generations. It has sustained small-time farmers and provided a source of work and income in communities that have long had to fend for themselves. These farmers, known as "smallholders", have faithfully cultivated the local palm oil industry with few resources and little government assistance. They have been intimately involved with the history and tradition of a crop that originated in Africa long before Herakles Farms happened to discover it and its potential for massive profits.