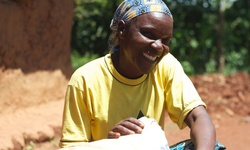 by Mark Anderson in Shimanyiro

Dotted along the narrow path that skirts the edge of Beatrice Alvitsa’s house in Shimanyiro, a green Kenyan valley near the border with Uganda, are dozens of millet plants, each protected by a carefully assembled fence made of sticks. “These keep the chickens and other animals out,” she says, bending down to mend a break in one of the fences.

Having received training in farming techniques and secured regular access to quality seeds and fertiliser, Alvitsa now produces enough food on her acre and a half of land to feed her family. She pays school fees for her seven children by selling surplus food and saves money in a mobile bank account.

Smallholder farmers provide up to 80% of Asia and sub-Saharan Africa’s food, where the vast majority of the world’s poor people live, according to the International Fund for Agricultural Development (pdf).

The most recent hunger statistics (pdf) suggest that 14% of the world do not have sufficient access to food, making it unlikely that the MDG to bring hunger rates down to 12.5% by the end of this year will be met. In its 2014 progress report, the UN said immediate action was needed to reduce hunger, lamenting that progress had slowed since 2005.

At a time when the world’s population is soaring – the UN has projected it could reach 9.6 billion by 2050 – a debate has emerged about how best to support farmers between advocates of large-scale agricultural projects and those who prefer more targeted, small-scale efforts. Global food production must double by 2050 to feed the world, the World Food Programme says.

“The most important way to create long-term food security is to recognise and include food sovereignty in national, regional and international policies that influence food systems,” says Nyoni Ndabezinhle, press officer at Via Campesina, an advocacy group for small-scale farmers. “We need our national governments to carry out comprehensive agrarian reforms, giving land to the peasants.”

In order to thrive, farmers in the developing world need access to seed, fertiliser, microcredit and microinsurance, as well as rights to land and union representation, according to Sir Gordon Conway, director of Agriculture for Impact.

“You need links to markets through warehousing in particular. You need fair, efficient and transparent markets and you need value chains where entrepreneurs can become engaged, and you need links into local and regional markets in Africa and international markets; you need the right kind of investment.”

Others say commercial agricultural schemes like the G8’s New Alliance for Food Security and Nutrition initiative will complement gains made on local levels, linking smallholders with international markets. The New Alliance says it will lift 50 million people out of poverty by 2022.

The African Development Bank (AfDB), which contributes funding to the New Alliance, says large-scale agricultural investment will help to scale up development gains made over the past 25 years. “Foreign private investment in Africa’s agricultural sector has significant potential to complement public resources,” says Chiji Ojukwu, director of the AfDB’s agriculture and agro-industry department.

“Large-scale investment in African agriculture and agribusiness, whether foreign, domestic, private, government-backed, or a combination of these, could pay a vital role in providing urgently needed financing, technology and markets, thereby assisting to ensure food security, contributing to poverty reduction and propelling agriculture-driven growth, with significant implications for achieving more inclusive growth.”

New Alliance projects, which require governments to change laws and policies to favour businesses, have been rolled out in 10 sub-Saharan countries. Critics have expressed alarm at the lack of effective monitoring and accountability mechanisms, and have condemned the scheme as a new wave of colonialism.

Nearly 35m hectares (82m acres) of land in 66 countries has been leased by foreign investors to produce food crops since 2006, according to Grain, an environmental watchdog. Large-scale agricultural production will benefit private-sector firms rather than poor people, Grain says, noting that financial companies and sovereign wealth funds are responsible for about a third of the deals.

The World Bank estimates that as much as 200m hectares of land in the developing world has been leased to agricultural investors over the past 10 years.

Food security is not simply about producing enough to feed every person, says Jomo Kwame Sundaram, assistant director general of the Food and Agriculture Organisation’s department of economic and social development. Ensuring adequate supply comes down to four key factors: food availability, access, stability and utilisation, he says. “The question of access is probably the most fundamental of the four dimensions of food security. We talk about the availability of food, the stability of food supplies and then access.”

The developing world is home to more than 900 million obese adults, nearly 30% more than the 557 million chronically overweight adults in wealthy countries, according to the Overseas Development Institute.

Writing in the Guardian, Hilal Elver, the UN’s special rapporteur on the right to food, says: “Transnational corporations can be part of the problem, tending to undermine the livelihood of locals, displacing them from their home and land, interfering with their access to natural resources, and causing environmental destruction.”

“The task is huge, but the tools are there. The challenge is mainly a matter of fashioning political will strong enough to overcome entrenched interests in maintaining food insecurity.”