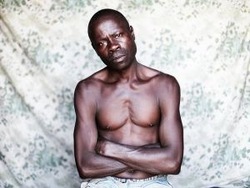 John Muyiisa is one of the Bugula islanders dispossessed by the IFAD-supervised oil palm plantation that has robbed him of his land and livelihood - and a co-plaintiff in the legal action that is launched today. (Photo: Jason Taylor / FoEI).
Ecologist | 19 February 2015

A small community in Uganda is challenging a UN-backed international oil palm venture that has expropriated small farmers and obliterated an entire forest on a Lake Victoria island to establish a vast plantation. Three years after the grab, Friends of the Earth groups are backing the islanders legal action, which is launched today.

Fighting a land grab can seem like a hopeless cause: the odds are hardly even when farmers without land or a source of income pitted against multinational corporations, European banks and UN Agencies. However in Uganda, one community is fighting back.

Four years ago, an oil palm plantation partly operated by the oil palm giant Wilmar International began on Bugula, a highly biodiverse island on Lake Victoria. Then home to about one hundred small-scale farmers, the project was sold to them with extravagant promises of employment and development.

Yet today, 3,600 hectares of pristine forest have been destroyed, replaced with a vast swathe of oil palm, and many farmers and their families find themselves destitute with little compensation - if any - awarded to them for the loss of their land.

Finding themselves in increasingly desperate circumstances, three of them are today launching their legal action on behalf of the rest of the community against the oil palm company, Oil Palm Uganda Limited (OPUL), demanding the restitution of their land and compensation for lost crops and income.

Although nominally independent, OPUL is 90% owned by Bidco Uganda, itself a joint venture between the oil palm giant Wilmar International, Josovina Commodities and Bidco Oil Refineries, a Kenya-based company. Wilmar International holds at least 39% of the shares in OPUL and is providing technical expertise for the project.

In launching the legal action in Masaka today, the Bugula islanders are taking on more than just these mighty corporations.

The oil palm project is backed by the Ugandan government, which even helped to finance it, and by a United Nations agency: the UN International Fund for Agricultural Development (IFAD), which is "directly overseeing" the project after providing a $52 million loan.

So this is 'improving access to land and tenure security'?

Established in 1974 after the World Food Conference, IFAD's 'motto' is "Enabling poor rural people to overcome poverty". Its Financing Policies and Criteria state that the projects it finances should incorporate "engagement with indigenous peoples" and "improving access to land and tenure security".

The Bugula project is carried out under IFAD's 'Vegetable Oil Development Project - Phase 2' which claims to be aimed at "increasing the domestic production of vegetable oil and its byproducts, thus raising rural incomes for smallholder producers and ensuring the supply of affordable vegetable oil products to Ugandan consumers."

According to IFAD, "Oil palm activities are carried out on Bugula Island in Kalangala District (Ssesse islands) and Buvuma Island in Mukono District. In the course of the project, about 3,000 smallholder farmers will directly benefit from oil palm development and 136,000 households from oilseed development. The project is directly supervised by IFAD."

It records a total project cost of $146.2 million, to which it is contributing a $52.0 million loan repayable in 2018, co-financed with SNV Netherlands Development Organization, which is contributing $0.3 million. It claims to benefit 139,000 households.

The Ecologist spoke today with Alessandro Marini,  IFAD's Country Representative for Uganda by telephone, but he repeatedly refused to comment at that time because he was "on his way into a meeting".

The UK is the single biggest contributor to IFAD.

John saw his 43-acre plot taken for the palm oil project, and has since not stopped fighting to get it back. John showed us the state of his house, which is about to collapse because he doesn't have the resources to repair it. The foundations of the new house he was planning to build for his family have been left abandoned since the project began.

When he showed us the small plot that was left to him, John said: "We all depended on this land. My land was not only my income but also a secured future income for my children. It would have provided me with the money I needed to buy a new house. Now I have lost my land and our plans are shattered." These concerns have found little sympathy among local government officials.

We also visited the nearby island of Buvuma, where IFAD has financed another oil palm project. When we expressed our interest to hear from the local community about the effects of the island's palm oil project, they exhausted themselves by explaining the benefits of the project.

"There will be electricity, employment, new roads, and extra income for local palm oil growers", officials told us. This sounded all-too familiar to what we heard during a visit in 2013, but two years on, these promises seem emptier than ever.

Once we had finished speaking with the officials, we joined them at a community meeting at the district house to discuss compensation for lost land. When the chairperson gave farmers the floor to talk about the effects of the project, many raised their hands.

They talked about how the compensation had been inadequate, how it is totally unclear to them how it had been calculated, and how some of them didn't want to leave their land but were given no choice. Clearly embarrassed and annoyed, a local official responded and corrected them. "People should not first sign an agreement and then complain after", he said.

His unsympathetic stance was mirrored by other government officials on both islands. Often we heard jokes about how farmers drank away their compensation money in bars, got themselves a second wife or otherwise managed to fritter it away.

This indifference, although unspoken, is implicitly shared by IFAD, BIDCO, OPUL and Wilmar. Indeed, the chain of responsibility stretches back further - to banks in Europe and the USA whose financial support sets the wheels in motion for these devastating land grabs.

Taking the case of Wilmar International, in 2014 US and EU financiers had a total of €371 million of shares in the corporation, and 1.1 billion Euro in loans outstanding to them.

For instance in the Netherlands, ING held more than €26 million in shares; the British bank HSBC held €298 million in loans, while BNP Paribas and Dutch Rabobank held €189 million and €111 million respectively. Deutsche Bank held €4 million in shares and €12 million in outstanding loans.

Like Wilmar, many of these financiers have adopted policies to address the environmental, social and governance impacts of their investments. However, there is no accountability mechanism in place for most of these commitments, and so there is no financial or legal incentive for financiers to follow through.

This means that many European financial institutions, through their investments in agribusiness projects, are supporting a significant number of what are in fact land grabs in the global South. Such incidents are widespread and growing: new cases are reported to civil society organisations on a near-weekly basis in countries from Cambodia and Papua New Guinea to Indonesia, Myanmar and Nigeria.

Europe needs to take action at the political level. Both by ensuring financial institutions on its soil are not complicit in land grabs, and by voting this year to finish reforms to halt the expansion of agrofuels which compete for cropland.

UN-IFAD must hang its head in shame

And clearly IFAD is an organization crying out for abolition. Its financing of the Bugula Island land grab is in clear violation of its financing principles and criteria, indeed the very purpose of its existence - "Enabling poor rural people to overcome poverty"

While IFAD speaks of "community-driven development approach to fighting rural poverty", "improving access to land and tenure security", "dynamic and inclusive rural development", "food and nutrition security for all", "inclusive growth and poverty eradication", and "sustainable smallholder agriculture" it is actually financing land-grabbing projects that achieve the precise reverse of all its empty rhetoric.

Indeed it is robbing poor farmers and farming communities of their land and livelihoods, leaving them destitute, and handing over their wealth for plunder by foreign corporations and profiteering financiers.

As for John and the rest of the former farmers of Bugula, the next steps in their fight for justice will be taken in court in Masaka. With pressure coming at them from both sides, the message to oil IFAD, palm companies and financiers alike is clear: the battle against land grabs is on.

Action: to support John Muyiisa's struggle in his search for legal redress for the farmers of Kalangala, please visit our crowdfunding page.

Anne van Schaik campaigns for accountable finance at Friends of the Earth Europe, and works with Friends of the Earth groups in Europe, South East Asia and Africa against landgrabbing for palm oil plantations. In coalition with FERN, Global Witness, ActionAid and others, she works to establish regulation measures for financiers at the EU level.