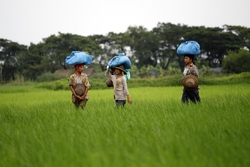 Myanmar may go back to being one of the world's major rice exporters in five to 10 years, as many Thai and foreign investors are looking to expand in rice mills and farms in the country.

Thai traders and experts all believe that Myanmar has great potential to become a major rice producer in the near future because it has plenty of land with good quality soil for raising rice, abundant water and a strategic location for distributing rice.

Vichai Sriprasert, honorary president of the Thai Rice Exporters Association, said last week that some rice millers and exporters have started exploring Myanmar to establish mills and parboiled rice processing plants after realising the country's potential to produce large quantities of the commodity for export.

"Thai investors are studying Myanmar's investment laws and regulations. Once all issues are clarified, they can start investing in a few years," he said.

Most investors are considering setting up large-scale rice mills to make their investment worthwhile. To build a large mill that processes up to 500 tonnes of rice a year, an investment of up to Bt300 million is required, not including the cost of land.

The areas that Thai rice traders are eyeing are around Yangon and in rice-growing areas along major rivers in Myanmar, such as the Ayeyarwaddy River and Bago, which flows through the central region, the Thanlwin or Salween River, which connects to Thailand, and the Sittaung River, which lies in the east-central part of the country.

Besides the existing rice growing areas, 40 million to 50 million rai of land in the country could be developed and promoted for growing rice.

Other foreign investors that are also keen on investing in the farming industry, including rice, come from mainland China, Japan and Korea, and from the Middle East.

Myanmar used to be the world's largest rice supplier before the 1980s. However, after the military government closed the country, local farmers shunned rice, as the returns became less attractive.

Chareon Laothammatas, president of the association, said that with the food security policy of many foreign governments, many rice importing countries are looking to expand to developing countries including Myanmar and other countries in Asean.

In 2014-15, rice production in Myanmar is forecast to increase by 1 per cent to 12.16 million tonnes in anticipation of continued expansion of the growing area.

The construction of eight dams, which were targeted to be completed last year, and the renovation of drainage canals in flood zones and deep-water areas in the Ayeyarwaddy region, are likely to increase the planting acreage for dry season rice.

Aat Pisanwanich, director of the Centre for International Trade Studies, said Myanmar is one of the high-potential countries that have attracted the interest of many Thai investors and rice is one of the potential businesses.

Rice production in Myanmar is cheaper than in Thailand, while Myanmar has many positive factors including plenty of space, water supply and a location to support rice growing and exporting.

The study found the cost of rice production in Myanmar is about Bt7,122 per rai, and could be lower

after state dams are built and operating.

The centre's study also forecast that Thailand would lose a total of Bt87.5 billion (or Bt8.7 billion per year) in rice exports to 2022 if a serious effort is not made to develop the industry. The Thai share of the world market is tipped to drop to 2.3 per cent from 2.5 per cent last year.

The lost market share will go to neighbouring countries - Vietnam and Myanmar.

Thailand's market share in Asia would slump from 1.3 per cent in 2013 to just 0.3 per cent in 10 years because other rice-exporting nations - mainly Vietnam, Cambodia and Myanmar - will play a more significant role in supplying the continental market.