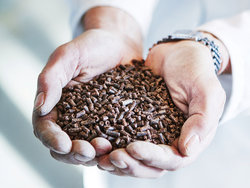 Like it or not, our seafood increasingly originates not in the deep ocean but on fish farms hugging the coasts. Aquaculture already supplies about half of the world's seafood, and global production is going to have to more than double by 2050 to meet demand, according to the World Resources Institute.

The business opportunity here is tremendous. Thousands of operations around the world now produce huge numbers of salmon, shrimp, mussels, tilapia and catfish, to name a few fish species that thrive on farms.

Not without significant cost, though — from pollution to antibiotic overuse to slavery, the global industry is rife with problems. But there also plenty of examples of fish being farmed in a way that may not endanger wild populations, deplete the ocean of them for feed or generate a lot of nasty waste.

Enter Aqua-Spark, an investment firm headquartered in Utrecht, The Netherlands. It wants to lend a hand to the small-and-medium sized businesses committed to producing safe and environmentally conscious farmed fish. When it launched in December with $10 million ready to deploy, Aqua-Spark became the world's first investment fund focused on sustainable aquaculture. The money comes from 35 investors in seven countries — one is institutional, the rest are private individuals — who see an opportunity to make money farming fish in new, responsible ways.

On Thursday, Aqua-Spark named the first two recipients of its funds. One is a California-based biotech company called Calysta that's making a fishmeal substitute. The other is a tilapia operation in Mozambique called Chicoa Fish Farm that the fund hopes will be a model fish farm for all of sub-Saharan Africa. Together, they're getting $4 million.

Mike Velings, Aqua-Spark's founder and a managing partner, tells The Salt he's confident these two companies could help transform the industry. And he says the fund has big plans to invest in a host of other innovative companies developing technologies and techniques for producing fish safely, with minimal impact on the environment.

Many producers of salmon and other carnivorous fish rely on smaller wild species like anchovies as a high-protein feed. (It takes about three pounds of these fish to produce one pound of farmed salmon.) But, as we've reported, stocks of these wild fish are strained.

Calysta, meanwhile, has created a product, called Microbial Protein, designed to ease the burden on these species. It's a fishmeal substitute made from microbes that occur naturally in the soil and are grown through fermentation. (Read my colleague Dan Charles' recent story for more on how that works.) According to the company, the end result is "a nutritious, high protein feed that is a sustainable alternative to fishmeal."
Carp are collected at a breeding farm near the Belarus village of Ozerny in November 2013. Researchers say there's a lot the aquaculture industry can do to be more efficient.
The Salt
Can Farmed Fish Feed The World Without Destroying The Environment?
Yonathan Zohar, Jorge Gomezjurado and Odi Zmora check on bluefin tuna larvae in tanks at the University of Maryland Baltimore County's Institute of Marine and Environmental Technology.
The Salt
Farming The Bluefin Tuna, Tiger Of The Ocean, Is Not Without A Price

"So far, most of the real alternatives to fishmeal are more expensive, but we think Calysta's product is something that's really competitive," Velings tells The Salt. "If you could ... prevent anchovies and other little fish from being fished for aquaculture, you could tip the balance of the oceans globally."

Calysta's feed, which is sold in powder and pellet form, is approved in the European Union for use in salmon, as well as in pigs, chickens and cattle. That the product got past the EU's strict standards suggests the U.S. Food and Drug Administration and other countries will approve it, too, says Velings.

Chicoa, the Mozambican tilapia farm, won support from Aqua-Spark because of its good practices and potential for expansion.

"There's a deficit of 1.6 million tons a year of fish protein in Africa, and we want to help solve that by investing in multiple tilapia farms in different regions," says Velings. "Chicoa is our foothold in the continent."

Some in the environmental community say they're optimistic about Aqua-Spark's ability to influence the aquaculture industry. "I think the private sector garners the most force out there, and I don't see anybody else doing what they're doing," says Aaron McNevin, director of aquaculture at the World Wildlife Fund.

"We need to leverage examples of sustainable aquaculture, and with these investments, NGOs can start pushing the curve a little bit. We can say to big, mainstream fish buyers, 'Why aren't you looking at these feed alternatives to wild fish?' "