Itochu, CP in deal to take $10.4 billion stake in Citic 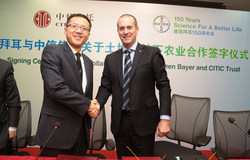 CITIC is involved in deals for farmland overseas and in China, where it is pursuing the consolidation and leasing of peasant lands through land trusts in partnership with the transnational pesticide and seed company Bayer AG.
Wall Street Journal | 20 January 2015

Itochu, CP in deal to take $10.4 billion stake in Citic

By Rick Carew and Atsuko Fukase

A Japanese conglomerate that trades everything from gas to grain and the holding company owned by Thailand’s richest person have agreed to a deal to pay about $10.4 billion for a fifth of Citic Ltd., in one of the biggest foreign investments in a Chinese state-owned company.

Japan’s Itochu Corp. and Charoen Pokphand Group, the agribusiness firm owned by Dhanin Chearavanont, are seeking loans from Japan’s largest banks to fund the tie-up, people with knowledge of the matter said. The Itochu-CP acquisition of 20% of Citic, one of the biggest deals in the region in the past year, was first reported by The Wall Street Journal in December.

In statements Tuesday, Tokyo-based Itochu and CP Group confirmed they have agreed to buy the Citic stake.

The investment by the Japanese and Thai conglomerates into one of China’s biggest financial firms comes on the heels of a thaw in tensions between Tokyo and Beijing after the presidents of both countries met in the Chinese capital in November.

That China is allowing a deal of such size shows Beijing is moving forward with its stated aims of expanding outside investment in its biggest state firms. Citic, the conglomerate created under China’s opening in the 1970s, took steps toward bringing in outside investors last year by selling assets from its unlisted parent company to its Hong Kong unit. Chinese state firms usually only list subsidiaries, subjecting only a portion of the company’s assets and management to outside scrutiny.

The three-way combination could also help cement the three parties as co-investors rather than competitors, as they seek to expand and buy assets across Asia and other markets, people familiar with the matter said earlier.

Itochu, one of Japan’s oldest trading houses, has been eager to expand outside its home market. Apart from CP Group’s focus on China, it is a major player in food and retail services in Southeast Asia. Mr. Dhanin has often talked of his ambitions to grow further. Citic, whose assets range from one of China’s biggest banks to securities firms and miners, has been bulking up outside China. Its brokerage, Citic Securities , purchased Asian securities firm CLSA a couple of years ago.

Itochu, CP, and Citic have pre-existing investment links that paved the way for the current groundbreaking deal.

Itochu owns a quarter of CP’s Hong Kong-listed unit, while the Thai firm has a 4.9% stake in the Japanese trading house. Itochu formed a “comprehensive strategic alliance” with Citic Group in 2011, making a $100 million investment in a Citic asset-management arm in Hong Kong.

The deal also marks a culmination of years of ties between Citic and Japan, and between executives at the state firm and the Japanese trading house.

Citic Chairman Chang Zhenming studied Japanese at a Chinese university in the early 1980s and served as an aide to more senior Citic officials as they formed partnerships with Japanese counterparts.

While other big Chinese companies have looked to the U.S. or Europe as models, Citic has carved a niche by cultivating ties with major Japanese firms. It has ties with Mizuho Financial Group , for instance, which was a key investor in the Chinese company’s 2007 float of China Citic Bank Corp. in Hong Kong. Mizuho also invested in the $37 billion injection of Citic assets into its Hong Kong-listed entity Citic Pacific last year.

Itochu is no stranger to China. It was the first Japanese trading house to resume shipping goods between China and Japan in 1972, even before China’s Communist Party and the Japanese government formally re-established diplomatic ties. Itochu has had a Beijing representative office since 1979.

Like Itochu, CP Group has a long history in China, and was the first foreign company to operate there after the Communist takeover in 1949. The Thai company made a splash in 2012 by agreeing to buy 15% of Ping An Insurance Group, one of China’s top insurers, for $9.4 billion from HSBC Holdings PLC. Founded in 1921, CP Group started in the feed and food industries, later adding retail, telecommunications and real estate.