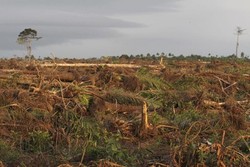 FREETOWN, Jan 17 (Reuters) - A Belgian and a Zimbabwean working for international agribusiness company Socfin Group have been shot during a protest over land rights in Sierra Leone, police said on Saturday.

The Luxembourg-registered company, part of the business empire of the French tycoon Vincent Bollore, is embroiled in a bitter feud with local landowners in the Malen chiefdom where it has its palm oil plantations.

Socfin said the two men were returning from overseeing the extinguishing of a fire at the plantation when they were attacked by people throwing stones and their vehicle was shot at. The two have received medical treatment for injuries and their lives were not at risk.

Police Chief Superintendent Nathaniel Brewah said 11 arrests had been made, among them an elected local councillor, and a manhunt was underway for the main suspect who is believed to have fired the hunting rifle.

A spokesman for MALOA, an organisation campaigning for compensation for locals aggrieved over a 2011 deal that ceded land to the company, condemned the attack.

Residents say the $5 per acre they receive for their land per year is not sufficient and argue they did not understand the lease agreement, or were coerced into signing.

The company said it fully consulted with landowners over the deal and had their support. It says it has heavily invested in local infrastructure and social services, as well as jobs.

Sierra Leone was devastated by civil war between 1991 and 2002. Since then, has succeeded in luring foreign investors in agriculture as well as resources such as iron ore and bauxite, though its economy has been hard-hit by a slump in international commodities prices and an ongoing Ebola epidemic.

Palm oil is the world's most important vegetable oil and is used to make margarine and soap.

Gordon Paterson and Tanguy Denis had gone to a plantation in Zone A to put out a mysterious fire that had been set to the plantation by some unknown arsonists in a village called Bamba. The incident took place on January 15, 2015.

It was as a result of trying to put out the inferno that the two Socfin staff got attacked by some unknown persons. Gunshots were heard and the company’s vehicle with registration number AJE 690 was pelted with messiles believed to be rock stones.

The Police boss in Sahn Malen told the Global Times that his men were determined to get to the bottom of this unprovoked attack. This is not the first time that the company’s personnel and property have come under such dastardly attack, according to Police sources.

The Public Relations Officer of Socfin, Mr. Easmon Moiguah described the action of the attackers on the company’s personnel and property as “callous and completely inhuman”.
Police investigations continue.