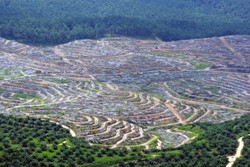 Five months of hearings culminate in recommendations for Jokowi

As Indonesia’s national inquiry into land conflicts affecting indigenous peoples draws to a close, it has become clear that police brutality has become a serial feature, that legions of companies are operating without permits and that the government hasn’t even catalogued the myriad indigenous peoples who live in the forest.

Five months of hearings by community leaders, bureaucrats, businesspeople and security personnel from every corner of the archipelago have finished, with the commissioners writing up their final recommendations, to be released this month as a policy document for President Joko Widodo.

That presents Jokowi, as he is known, with one of his biggest challenges, betting into vastly monied timber interests that have a major interest in continuing to clear forest and plant oil palm, and which have found a willing ally in the notoriously corrupt Environment and Forestry Ministry. The World Wildlife Fund estimates that as much as 40 to 60 percent of Indonesia’s timber is exported illegally, principally to Japan and China, costing the government as much as US$3 billion a year.

The hearings have produced a litany of abuses. Yet while many feature prominently in the dialogue surrounding land grabbing and indigenous peoples, another major theme has been less talked about: the use of “divide and conquer” as a strategy for separating communities from the rights to their territory, some say as a matter of course.

“It was prominent in all the cases,” Rukka Sombolinggi, international advocacy coordinator of the Indigenous Peoples Alliance of the Archipelago (AMAN), said after the hearing in Kalimantan, one of eight held across the country. “Whether it is government, company or police, the main approach they always use is creating internal conflicts, and then taking advantage of that. It is their most powerful weapon.”

The inquiry’s commissioners noticed it too. Asked about the phenomenon, Sandra Moniaga of the National Human Rights Commission (Komnas HAM) rattled off a series of examples from around Indonesia.

All too often, she said, proponents of development projects try to “capitalize on differences within the community” instead of seeking a true consensus, as is the decisionmaking norm for indigenous groups that tend to operate collectively, with some form of communal ownership, rather than on a typically capitalist or individual basis.

“Divisions are natural; people have different opinions,” Sandra said. “But what is worrying is that [companies and officials] are utilizing those differences for their own interests. And that creates tension within communities.”

Tactics vary with some companies handing out jobs, cash or other spoils to win some people over while leaving others out in the cold. A common practice is to initiate contact by hiring a few residents to convince the others. Politicians lend a hand by maneuvering their cronies into key posts at the village and subdistrict levels. Judicial processes can also be manipulated.

What it all amounts to is foisting an unfamiliar model of land acquisition on communities that have always played by different rules, often by tempting or empowering some of their number to usurp the old ways, and calling in the security forces when the others resist.

The stakes are high: Indonesia is home to tens of millions of indigenous peoples, by AMAN’s count, and last year the government recorded 8,000 land conflicts. Most of those citizens and conflicts reside and exist in the some 65 percent of the country designated as forest area, which is overseen by the Environment and Forestry Ministry.

These days, the ministry is facing perhaps the greatest challenge to its power yet, with a variety of new developments threatening to reduce its control over the forest zone and its authority to greenlight certain industrial activities. The lack of follow-up on one of these developments, last year’s landmark Constitutional Court ruling that took indigenous peoples’ customary forests out of state forests, prompted Komnas HAM’s inquiry, which concentrates on the forest zone.

Nowhere were the trials of communities divided more on display than at the hearing in Pontianak, West Kalimantan, in October. In one case, that of Semunying Jaya village, where a subsidiary of palm oil giant Duta Palma was shown to have cleared forest without a crucial permit, stakes driven through local ties have pierced even familial bonds. Two close cousins, one of them hired by the firm and the other adamantly opposed to it, testified on opposite sides of the aisle.

“You wait! I’ll punish you!” the company man hollered at his kin in a tense moment during the proceedings, Sombolinggi recalled.

In another case, the head of West Kutai regency, East Kalimantan province, was said to have redrawn the border between two villages after one rejected overtures from palm oil giant First Resources.

Masrani, the former chief of Muara Tae village, accused First Resources of colluding with the regent and with neighboring Muara Ponak to swipe Muara Tae’s customary territory out from under it.

He called the company’s claim that its subsidiary had bought hundreds of hectares from just four Muara Ponak residents ridiculous because in the Dayak Benuaq system, only by cultivating a plot could one lay claim to it. “In our tradition, also in the Ponak community, it is impossible to have such a huge piece of land,” Masrani explained during his testimony. “Even if you spent the rest of your life working the field every single day without sleeping, you wouldn’t be able to cultivate even half of that land.”

Amalia Falah Alam, Indonesia complaints coordinator from the Roundtable on Sustainable Palm Oil (RSPO), of which First Resources is a member, acknowledged that “one person cannot not sell more than five hectares,” but said that Yakobus, a Muara Ponak resident who sold the company 400 hectares, claimed to represent his extended family in the deal. The RSPO is investigating.

Masrani counted 33 separate instances of nefarious border redrawing in West Kutai, all of them, he said, perpetrated by the same regent, who has been nearly a decade in office.

“In this regency it's all the same,” Masrani said in an interview. “When one village doesn't want to accept a company, the regent working together with the company changes the borders and uses the neighboring village to accept the company, so the borders are moved. And the village that accepts the company gets the territory.”

The regent, a politician from Jokowi’s party named Ismail Thomas, answered Komnas HAM’s invitation to appear at the hearing by sending the head of his Forestry Office, Moniaga said, although the man couldn’t answer many questions because he had just been appointed.

Conflicts like the one in Muara Tae raised an important question about narrative, said Tomasz Johnson, forest campaigner from the EIA, which filed a grievance against First Resources with the RSPO.

First Resources, Johnson said, was treating the dispute as a purely horizontal conflict between Muara Tae and Muara Ponak, presenting itself as a passive party in the villages’ disagreement over who owns the land.

“But it is absolutely the case that the company’s presence sows this kind of discord,” he said. “And I think when you go back into the way these communities govern their land traditionally, this sort of model of land acquisition doesn’t really work within that system.”

First Resources spokesperson Serene Lim said the dispute predated the company’s arrival, but both Masrani and Muara Ponak chief Rudiyanto said at an RSPO meeting in December that there had previously been no problem, meeting minutes showed.

A similar case, Johnson said, could be found in Tumbang Marikoi, Central Kalimantan province. That village had operated on a system of communal ownership until a company named Kahayan Agro Plantations (KAP) received an oil palm concession from the regency government.

Before it could set up a plantation, the government told KAP, it would have to acquire the land from the community. According to local customary law, individual land tenure is exercised by clearing and using forest. When the company arrived, there were still large tracts of unclaimed forest. So KAP encouraged residents to mark out new boundaries, offering a flat fee per hectare.

Some people refused to deal with the company. Others went out and marked off as much land as they could. Those people got paid, the rest got nothing and KAP snapped up the land.

“So what you have is a complete perversion of their land management system, just a recipe for disaster,” Johnson said. “You can see how that would explode into conflict.”

Other disreputable tactics were also allegedly employed. The village’s customary leader said the company offered him bribes to sign off on the concession.

“They said ‘you must sign this, because the head of the village and the head of the subdistrict have signed it and you are the only one who has not’,” the leader, Tongkuy, is quoted as saying in an EIA report published in December. “‘If you sign this, I will renovate your house.’”

Johnson recalled another Central Kalimantan village in which a handful residents wanted to sell, but the chief said no and imposed his will.

“I think what you see is that when you have a really strong individual, or just that kind of strong unity coming from whatever source, the community can remain cohesive,” Johnson said. “Once they drive one division into that, it’s all over.”

As village chief, Masrani could not keep everyone on side. He said that the company hired four Muara Tae residents to spread its gospel and that when he sued the regent for redrawing the borders they helped engineer his dismissal from his post. The regent replaced him with someone from the subdistrict office who didn’t come from Muara Tae and supported the oil palm project.

The dispute has not always been peaceful. The company uses Muara Ponak residents to escort its bulldozers, which have been physically resisted by people from Muara Tae. Sometimes they fight.

“We have been thrown into a collision with Muara Ponak by the company so that we, as enemies in a hostile way, often clash violently,” Masrani said.

Masrani and others continue to challenge the company, though he no longer can use his formal authority to do so. His plan is to organize all the West Kutai villages having problems with First Resources to oppose the company together.

Part of the problem in Muara Tae and Tumbang Marikoi, as well as in much of Indonesia, is that locals lack documentation for their land claims. That’s why AMAN is helping indigenous groups map out their territory. The government has also embarked on a “One Map” initiative to integrate conflicting licensing and land maps used by Indonesia’s different agencies.

But not all movements to recognize land tenure are created equal. In India and Cambodia, officials had answered the call to protect indigenous rights by doling out individual titles, which can actually do more harm than good, according to Joan Carling, secretary general of the Asia Indigenous Peoples Pact.

“That only makes it easier to divide communities and convince people to sell out,” she said. “Instead of protecting the land, it becomes a means to get it.”

Indonesia, Carling added, should create a mechanism like they have in the Philippines, where indigenous groups can obtain a “certificate of ancestral domain” for collective ownership.

She also called for Indonesia’s central government to set out a national framework to guide regional governments in implementing the Constitutional Court ruling, without which that authority would be prone to “misuse or misinterpretation” at the local level, and for the country’s parliament to finally pass a law on indigenous peoples’ rights based on the corresponding United Nations declaration.