Last week, EIA organized an unprecedented regional workshop for Civil Society Organizations (CSOs), local communities, and Indigenous people groups in the Congo Basin to address the emerging threat of palm oil development in the region. Nearly 40 civil society experts and community leaders from over 25 organizations gathered in Douala, Cameroon for three days of discussion, presentations, and strategic reflections on how to address harmful issues related to palm oil expansion in the region. 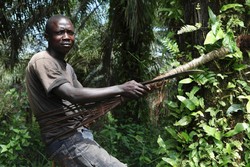 The majority of palm oil used globally – commonly in food products, cosmetics, and bio-fuels – is currently grown on plantations in Indonesia and Malaysia.  But massive global demand, coupled with increasing land scarcity in Southeast Asia, is leading to development of palm oil plantations outside of current productions centers. The Congo Basin is the new frontier of palm oil production, with vast swaths of land covering hundreds of thousands of hectares of primary rainforest currently allocated for palm oil cultivation.  Many communities and Indigenous peoples rely on the Congo Basin rainforests for food, fuel, and housing just as they have for centuries.  Extreme environmental degradation, land-grabbing, and human rights abuses have plagued many existing palm oil projects and represent glaring new threats to the region.

To support communities fighting unsustainable and unjust forest destruction in the Congo Basin, EIA is now applying the lessons learned from decades of campaigning against illegal and unsustainable logging to the next big threat to the biodiversity and peoples of the region: oil palm plantation development. Several local and national NGOs have already been working to create transparency and accountability in palm oil development. EIA is supporting these efforts by bringing our expertise on illegal timber trade to the palm oil debate, including by documenting illegal activities in palm oil plantations and assisting our allies to assert their rights to their lands, territories, and resources.  For example, “conversion timber,” or the timber felled to clear land for other uses, such as palm oil, is often felled without legal permits or community consent, rendering it illegal on the U.S. and EU markets, and EIA hopes to use existing legal levers to arrest massive illegal forest clearance driven by palm oil expansion.

The first step in EIA’s approach was to gather CSOs and community leaders from several countries in the Congo Basin for a three-day workshop to discuss the implications of current and future plans for palm oil development in the region, taking local and indigenous communities’ rights into full account.  Participants at the workshop, civil society and indigenous peoples groups from Cameroon, the Central African Republic, the Democratic Republic of Congo, Gabon, and the Republic of Congo, agreed to a joint position on the expansion of oil palm in the region, including recommendations for the Congo Basin governments.

Among these recommendations, they urge governments:

1. To commit to no conversion of primary forests and high conservation value areas, as well as to limit the conversion of natural forests for oil palm plantations to the highest extent possible,
2. To increase transparency in the palm oil sector to allow effective participation of CSOs and local communities when negotiating palm oil contracts, and
3. To recognize and secure community land tenure rights, as well as to fully respect community rights to Free, Prior and Informed Consent (FPIC) when allocating lands for palm oil plantations.

With this statement, EIA and partner organizations in the region can now begin to hold governments and companies accountable with joint force.  EIA will continue to work with these organizations and communities on the ground to identify and track illicit activities.