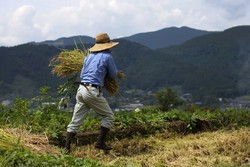 “There are foreign investors that would like to own their own land and bring products out under their own brand, if only investment companies were permitted,” says Masami Iijima, chief executive of trading company Mitsui & Co. (Photo: Bloomberg)
Wall Street Journal | 21 December 2014

KASHIWAZAKI, Japan—Like most Japanese farmers, Fumio Tamura works long hours and makes little money, especially with domestic rice prices down by around a quarter over the past couple of years.

“Rice has gotten so cheap that I can barely make any profit after paying all the expenses,” Mr. Tamura said.

Now farmers like Mr. Tamura are bracing themselves for far-reaching changes.

Prime Minister Shinzo Abe, who is set to outline policies for his next administration on Wednesday after his ruling party’s election victory Dec. 14, has made agriculture a key part of his pro-growth policies. The government is expected to draft legislation in the next couple of months that would transform the nation’s powerful agricultural cooperatives and the way farmers do business.

Meanwhile, Japan and the U.S. are in the late stages of negotiations over a free-trade agreement, the Trans-Pacific Partnership, that would open Japan to an unprecedented level of agricultural imports.

Businesses are keen for the overhaul to move forward. Masami Iijima, who is chief executive of trading company Mitsui & Co. and has accompanied Mr. Abe on overseas trips, said it was among his top requests for the next Abe government.

It would also bring in more foreign investment, he said, observing that Japan now lags behind other advanced nations in that area.

“There are foreign investors that would like to own their own land and bring products out under their own brand, if only investment companies were permitted,” he said.

Japanese companies are prohibited from stakes of 50% or more in farm enterprises. They aren’t allowed to own farmland directly, though they are permitted to lease it. The government is now considering allowing them to buy it.

Mr. Abe will surely face resistance, though, including opposition from within his own Liberal Democratic Party. The LDP has protected farmers with favorable policies for decades, while relying on their outsize power at the ballot box. The powerful cooperatives to which farmers sell their produce have fought efforts to restructure them or strip them of power.

Some farmers and co-op officials in Niigata, a leading rice-growing region, acknowledge that change isn't only desirable but inevitable. The nation’s average farmer is 66 years old and tends to around two hectares, or 5 acres. Overall production is in decline by value. Trade barriers and inefficiency mean Japanese consumers spend a greater portion of their income on food than people in other developed nations. And in trade negotiations with the U.S., Japan has already agreed to a dramatic opening to imports that would pose an existential challenge to many Japanese farmers.

“Japan cannot continue the ‘convoy system’ when the rest of the world is liberalizing,” said Choji Imai, deputy leader of the Niigata prefecture cooperative. He was referring to the practice of an entire convoy traveling at the pace of the slowest ship, meaning Japan’s policies were often tailored toward protecting the weakest producers.

The question for farmers is what comes next. They fear that it will be exploitation and a loss of independence if, as Mitsui’s Mr. Iijima suggested, change means opening the doors to big businesses, foreign and domestic.

“Without a national organization negotiating on behalf of individual farmers, they could be easily exploited by trading houses,” Mr. Imai said.

Tough negotiator is exactly the role overhauled cooperatives could play, said Yasufumi Kanemaru, the head of the government’s agriculture deregulation panel and chief executive of Future Architect Inc., a consultancy. In fact, such a transformation is the co-ops’ only hope of survival in a competitive agriculture sector, he said.

“The co-ops, in their current form, won’t stand a chance of taking the lead in any business venture they would form with corporations,” he said. “They have no business know-how.”

Earlier this year, Mr. Kanemaru’s panel said the co-ops devote too much time and resources to activities not directly related to agriculture, including political campaigning, banking and real estate. Among other things, the panel recommended revoking their right to collect fees and participate in political activities, and suggested that the wholesale marketing organization, Zenno, be converted into a for-profit company owned by cooperative members.

With Japan’s population declining rapidly, the focus for its agriculture sector should be on exports, Mr. Kanemaru said, and Zenno should model itself after New Zealand’s Fonterra, a cooperatives-owned dairy export behemoth.

“We want Zenno to work much harder to find customers for Japanese food among wealthy people out there in the world,” he said.