Forty NGOs based outside of Cambodia support ICC case

Forty NGOs based outside of Cambodia support ICC case 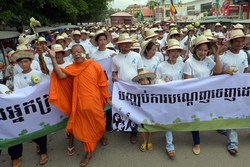 Cambodia is no stranger to high-profile land rights cases. Since 2000, the equivalent of more than 70% of Cambodia's arable land has been leased out.

Forty NGOs—none of which is based in Cambodia—signed a letter that was sent to the International Criminal Court (ICC) on Friday, asking it to open a preliminary investigation into an October filing that accused the Cambodian “ruling elite” of crimes against humanity.

On October 7, U.K.-based lawyer Richard Rogers filed a complaint with the ICC, claiming the Cambodian government and its allies in the private sector systematically evicted 770,000 Cambodians from their homes over the past 14 years.

In the filing, Mr. Rogers says Cambodia’s “ruling elite” committed widespread land grabs as well as assassinations and murders for the purpose of personal enrichment and the consolidation of political power.

Friday’s letter says that if the ICC opened a preliminary investigation into the Cambodian government, it would set a global precedent.

“It would send a powerful message that when land grabbing is widespread or systematic, and reaches a certain level of gravity, international criminal law becomes engaged,” the letter says.

Despite 40 diverse NGOs having signed the letter—from farmers’ organizations in the U.K. to human rights groups in Asia and Europe—there were no Cambodian signatories.

Am Sam Ath, technical supervisor for local rights group Licadho, said Mr. Rogers did not contact Licadho to sign the letter, but he also said he could understand why.

“I think [the signatories] are international organizations that might have more evidence and information,” Mr. Sam Ath said.

“Maybe they think local NGOs work closely with the government, so they might get too much pressure from the government if they signed,” he added.

Mr. Rogers could not be reached for comment Sunday.

Philippa Woods, chairwoman of the Family Farmers’ Association in the U.K., which was among the signatories, said her organization often receives letters looking for support. But she did not recall signing Mr. Rogers’ letter.

“I do generally support these letters, if they’re sensible,” she said. “But I can’t remember what this specific letter was.”