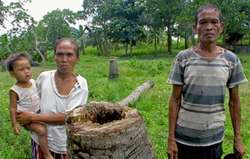 Between 30 June 2012 and 15 May 2013, ALDAW has carried out several field appraisals in six southern Municipalities in Southern Palawan, which are all being affected by oil palm development.

ALDAW (Ancesteral Land/Domain Watch) release a new comprehensive report on the impact of oil palm expansion in Palawan, the report has been supported by the Micro Grant Fund for Community-Based NTFP Initiative of Non-Timber Forest Products – Exchange Programme for South and Southeast Asia and Broderlijk Delen. Both ALDAW and NTFP-EP are members of the global Consortium on Indigenous Peoples’ and Community Conserved Territories and Areas (ICCAs).

The study based on open-ended interviews, direct observation and ethno-botanical investigation, indicates that the most common plant species used in basketry and for the production of local artifacts have almost or completely disappeared in those areas being directly impacted by oil palm development. This entails that important non-timber forest products (NTFPs) are no longer available in those areas where they were collected customarily.  In such areas, useful plant species have been either exhausted and/or highly depleted and, now, people must walk very far to be able to locate and harvest them.

According to Jomel Asdari from sitio Pasi, Bgy. Pulot (Municipality of Espanola)“before we walked half hour only to get the raw material for building our houses, for our artifacts and for collecting medicinal plants.  Now we must walk half day, to the other side of the mountain, before we can find the things we need”.

Palawan community members speak passionately about the importance of medicinal plants and their dramatic decline “It is like we are dying little by little because we no longer have the plants needed to cure ourselves” says Panglima Kenisio Malasan from sitio Pasi.

“Despite oil palm and mining operations, we will not give up the use of traditional medicines.  Although we must travel far away to get them, these plants are still the only remedy we have for curing ourselves”say Panglima Lonisio Aplino, from sitio Marebong, Bgy. Pulot, Municipality of Espanola.

Yet there is a deep concern on whether the coming generations will be able to recognize and use medicinal plants: “We are afraid that the traditional knowledge of medicinal plants will not be passed to the next generation, also because these plants are now located very far from our settlements and it is difficult to bring the children with us when we look for them.  Before, children were following the elders during the collection of medicinal plants and they were instructed on how to collect and use them. Now our children cannot identify these medicinal plants, because they haven’t had a chance of seeing them” says Nestor Aplaon from sitio Marebong.

According to indigenous community members animals species that were traditionally trapped and hunted, thus providing a steady source of proteins, have declined dramatically due to the conversion of land into oil palm plantations.  Community members also complain about the loss of fresh water resources such as fish species and edible mollusks.  Indigenous people attribute the decline of such resources to the activities of oil palm companies and to the chemicals used in plantations.

The most negative impact on biodiversity has been noted in those areas being impacted concurrently by oil palm plantations and mining extraction, in the Municipality of Espanola:“because of the great amount of dust caused by mining operations of Citinickel, we always suffer of cough, running noses and often feel pain in the chest” says Paplina Setya from sitio Pasi.

The report suggests that a direct relationship exists between oil palm expansion, the impoverishment of people’s diet, decreasing household food security, progressive deterioration of traditional livelihood and the interruption of cultural transmission related to specific aspects of indigenous people’s knowledge.

The report also provides background information on the uniqueness of Palawan biological diversity and on the culture of the Palawan ethnic group with particular emphasis on their upland agricultural practices, extraction of ‘sago’ starch from wild palms, and use of plants for basketry and for the construction of other traditional items.

The study further proposes some of the possible reasons behind the weak involvement of civil society at large, as well of national NGOs, with the anti-oil palm struggle. Policy recommendations for key government agencies are provided in the annexes. Copies of important documents showing the violations committed by oil palm companies are also included at the end of the report together with various letters of concern from foreign institutions which are supporting the ongoing call for a moratorium on oil palm expansion.