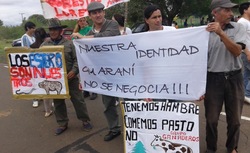 On November 27th, a group of organizations representing local farmers, Indigenous communities, and environmentalists gathered to protest in the Capital of Corrientes, Argentina, to demand an end to the land-grabbing by foreign investors in the province.

Across Argentina, Corrientes has the highest percentage of its land being sold to foreign investors, leaving communities unable to continue their traditional agricultural practices, animal grazing, and with diminishing levels of fresh water.

Currently, around 1,200,000 hectares are controlled by foreign companies.  In the Iberá region more than 350,000 hectares are in foreign hands, including Harvard University which invests in 86,000 hectares of intensive forestry plantations. “The companies know how to operate behind trustees and thus what is evident day by day in the countryside is that the transference of land into foreign hands has not meant work and progress, but rather more marginalization, dislocation and death,” affirmed Cristian Piriz, advisor of Ysyry Ecological Group of San Miguel, a local community neighboring Harvard’s Eucalyptus plantations.

“Those who are mobilizing are here to represent more than 1,000 farmer families and from the various rural areas in the Iberá region.  We have diverse situations regarding land tenure but we all depend on the land to plant crops and sustain ourselves.  Yet we see that the systematic rice paddies and mills, forestry plantations and tourism enterprises destroy our wetlands, our ancestral territory,” Reflected Apolinaria Ramírez, advisor of the Boquerón/Mercedes area.

The Iberá wetlands system, one of the world’s largest freshwater bodies, lies in the province of Corrientes in Northern Argentina. The wetlands harbor 30 percent of the country’s biodiversity and are home to several endangered species. However, vast monocrop pine and eucalyptus plantations have virtually eliminated biodiversity in more than half of the wetlands, devastating freshwater levels and dramatically affecting the livelihoods of the Guaraní Indigenous People who have lived in relationship with the lands for generations and depend on these ecosystems. “The monopolization of land and the intensive use by the planting of only one species (monoculture), sets the stage for a situation where without a doubt the Indigenous communities are being left without access to land,” denounced Emilio Spataro, General Coordinator of “Guardianes del Iberá. After receiving no response from Harvard University after a recent visit to the Cambridge, MA campus, communities have committed to making their voices heard at their provincial governments. “Not much of an analysis is needed to note that the managers of the companies are those that tell the current governors what to do,” explained Spataro.

Together the organizations delivered a petition to the provincial government asking that the government review their support of the multinational companies and generate more binding commitments to defend and recuperate land for small farmers and environmental care.

“For 426 years we resist whichever form of colonization and plunder, and despite everything in our wetlands we still speak and laugh in Guaraní, we will not be defeated” Concluded the advisors of Guardianes del Iberá.

Take Action to support the communities of Iberá