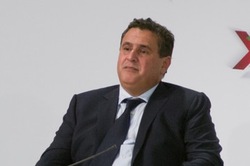 The future could be bright for Africa’s agriculture. But to realize its full potential the continent’s governments need to rethink their approach to encouraging investment, Morocco’s Agriculture Minister Aziz Akhannouch says.

“I firmly believe the future of agriculture is in Africa. It has a lot of natural resources including water and very fertile soils,” Akhannouch says, “but it needs a lot of research—and a lot of financing.”

The key, Akhannouch asserts, is for governments across the continent to create an environment that is more conducive to investment. “Then we can start to see an unleashing of the potential,” he adds.

According to the World Bank’s 2013 report on African agriculture, the continent is home to almost half of the world’s uncultivated land that is suited for growing food crops and its harvests habitually yield far less than they could, particularly for key crops such as maize. Much of the food grown in Africa goes to waste—by some estimates, as much as 50% of the produce in some countries never makes it to market.

African countries that have vast tracts of underutilized potential farmland include many that are more commonly associated with poverty, strife or hunger, such as Ethiopia, Angola and the Democratic Republic of Congo.

Daniel Hulls, CEO of AgDevCo, a London-based social impact investor and agricultural project developer, describes the potential in Africa as “massive” and estimates that only 6% or 7% of the continent’s viable arable land is cultivated. “Of that, only 4% is irrigated,” he notes. “It’s a vast amount of land and it’s tremendously underutilized.”

The World Bank estimates that Africa could more than triple the value of its food output from $313 billion a year to $1 trillion if its governments were to “radically rethink their policies and support to agriculture.”


Morocco’s Agriculture Minister Aziz Akhannouch at the Global Entrepreneurship summit in Marrakech, Morocco, November 2014 Dan Keeler/The Wall Street Journal
Akhannouch says African governments could attract more investment by better defining the value proposition for investors—something Morocco has done as part of its own successful efforts to boost its agricultural productivity. Since 2008, under its so-called Plan Vert (Green Plan), Morocco has boosted agricultural output by more than 40%.

The strategy is aimed at growing both small-scale farming and larger-scale commercial agriculture through a range of reforms in areas such as water management, access to inputs—such as seed and fertilizers—and improving access for farmers to their markets.

At the center of Plan Vert, though, is investment, Akhannouch says. “We clearly laid out the agricultural opportunities offered. The agency [managing Plan Vert] effectively aggregates projects into packages that will be attractive to investors.”

Governments of other African countries looking to boost their agricultural output could follow a similar strategy, he asserts. “Aggregating agricultural projects together will make them viable for larger investors,” he says.

WSJ Frontiers Newsletter
Enter your email to be notified when we launch the new WSJ Frontiers weekly email newsletter
Hulls agrees that such a strategy could help unlock some potential investment. “It’s not the absence of capital that’s holding back investment, it’s the absence of bankable projects that is the problem,” he notes.

Aggregating smaller farms into packages that catch the attention of investors won’t be enough, though, he argues. The obstacles to private investment in African agriculture are significant, Hulls adds, including high transaction costs, poor transportation infrastructure, uncertainty over land ownership rights and a lack of market infrastructure.

Kindra Halvorson, regional director for East Africa at TechnoServe, a nonprofit organization that develops business solutions to poverty, says one of the major inhibitors of agricultural investment is the unpredictability of government policies in many countries: “Governments need to focus on…creating a consistent, predictable environment,” she says.

Akhannouch agrees that the government’s role in supporting agricultural reform is crucial, and highlights the unwavering support of Morocco’s King Mohammed VI as a key factor in Plan Vert’s success.