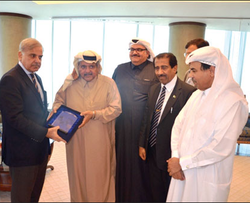 Sheikh Faisal and Sharif exchange a memento in the presence of other officials.
Gulf Times | 8 December 2014

Pakistan, which is currently in negotiations with Qatar for liquefied natural gas (LNG) supplies, has opened its farm sector to investments from Qatar, which has placed utmost priority on food security.

Punjab province Chief Minister Shabaz Sharif invited investments in his meeting with the Qatari Businessmen Association (QBA), where both the sides discussed ways of enhancing trade co-operation and investment as parts of strengthening bilateral relations between the countries.

The meeting was also attended by Shahid Khaqan Abassi, Pakistan's Minister of Petroleum and Natural Resources, and Shehzad Ahmed, Pakistan's ambassador in Doha; while the QBA was represented by its chairman Sheikh Faisal bin Qassim al-Thani and other officials such as Nasser Sulaiman al-Haidar, Maqbool Habeeb Khalfan and Sarah Abdullah.

During his presentation, the visiting chief minister highlighted the investment opportunities available in Pakistan in different sectors, especially in electricity generation, and the energy sector in general.

Secretary of the Ministry of Petroleum and Natural Resources Abid Saeed had said last week that the Pakistani government was making arrangements to import 2bn cu ft of LNG per day in the next two years to meet energy needs.

The first LNG terminal would be completed by Elengy Terminal Pakistan Limited at the Port Qasim by the end of February next year, he said.

In addition to the energy sector, Pakistan, Sharif said, is also keen to attract investments in agriculture, which can strengthen Qatar's food security programme.

The Qatar National Programme for Food Security, which was established in 2008, is aimed at developing a sustainable food security programme for Qatar by enhancing domestic agricultural production and strengthening the reliability of food imports from abroad.

Pakistan has been witnessing increasing interests in corporate farming, which has brightened the prospects for fresh investments in different areas of the sector in Punjab, Sindh and Khyber Pakhtunkhwa provinces.

He requested the Punjab chief minister to provide QBA members with detailed studies of different projects available in Pakistan for investment as a preliminary step to organise a (business) delegation to Pakistan.

Qatar has signed a number of bilateral agreements with Pakistan, including an agreement on promotion and protection of mutual investments; an agreement to regulate the recruitment of Pakistani workers in Qatar; a memorandum of understanding between the Qatar Investment Authority and Pakistan regarding the establishment of an Islamic Bank and an insurance company; and an agreement to avoid double taxation and prevention of fiscal evasion.

Trade volume between Qatar and Pakistan reached $800mn in recent years compared to $450mn in 2006.

Pakistan's economy depends mostly on the service sector, which constitute 53.1% of the GDP, followed by the agricultural sector which amounts for 25.3%, while the industrial sector amount for 21.6%.