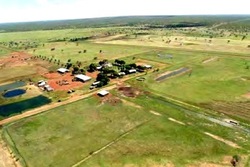 Consolidated Pastoral Company (CPC) is buying the much-heralded Bunda Station of the Victoria River District, Northern Territory, for about $15 million.

The 178,800-hectare station owned by the Underwood family sits adjacent to CPC's Kirkimbie Station on the Western Australia border.

CPC chief executive Troy Setter confirmed the move to buy the property, which the company has leased several times in the past.

"We are in the final stages of due diligence and it is under contract," Mr Setter said. "This purchase will allow us to have a property with major scale in the Victoria River District."

The $700 million CPC, which in March had about $418 million in equity, controls 19 properties across Australia's top end covering more than 5.6 million hectares.

CPC delivered a $26 million loss for the full year to March 2014, down from a $14 million profit in the previous corresponding period. The result was principally due to the drought of 2013 and higher operating costs.

The company's leasehold properties slipped in value from $311 million to $295 million, according to accounts filed with the corporate regulator. Freehold land value was unchanged at $93 million.

Mr Setter said the company's private equity owner – London based Terra Firma – was committed to the beef industry and that further value could be developed out of the company.

The purchase of Bunda Station reflects the strategy of the company to beef up its property holdings and quality of cattle.

The heifers were flown to Indonesia in a landmark deal between the Indonesian government and Brisbane-based exporter Lembiru Livestock.

The current owner of Bunda Station, the Underwood family, sold off adjoining Inverway and Riveren Stations to Indonesian group Japfa, also known as Santori, last year for about $35 million.

The sale of Bunda Station, which was passed in at auction in 2012, with bidding opening at $10 million, is another sign of improving property conditions in the cattle industry.

Australia's queen of mining, Gina Rinehart, has struck a deal to purchase four Kimberley cattle stations worth about $68 million. Moola Bulla, Mount Amhurst, Beefwood Park and Shamrock Station will be added in to her new joint venture with Dowford Investments. That venture includes the development of Liveringa and Nerrima Stations in the West Kimberley.

Herron Todd White valuer Frank Peacocke said the recent sales activity in the north and the fundamentals in the cattle business had increased competition for stations.

"At this stage there are at least five and possibly as many as nine, stations throughout the NT and Kimberley that are reportedly either done deals or in the final stages of negotiation and we won't know what impact their ultimate sale prices will have on the market's perception of where values sit until these deals are consummated and the sales thoroughly analysed," Mr ­Peacocke said.

"However, there is clearly some competitive tension starting to come back again and maybe influencing prospective purchasers in their bidding."