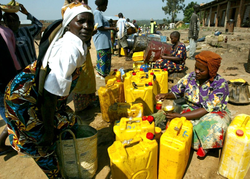 A Congolese woman buys palm oil to make her meal in Bunia's market in the northeast of the Democratic Republic of Congo on June 19, 2003.
Reuters | 21 November 2014

One of Africa’s largest palm oil investors has announced plans to improve social infrastructure for its workers, a week after a Thomson Reuters Foundation investigation found that poorly paid plantation employees in the Democratic Republic of Congo were living in dilapidated homes with poor social services.

Feronia, a Canadian-listed company registered in the Cayman Islands, operates three major plantations in the DRC employing more than 3,500 workers on a 107,000 hectare concession.

Feronia spokesperson Paul Dulieu said he couldn’t say exactly how much the company plans to spend on the new infrastructure.

“The purpose of this (new assessment) is to create a definitive plan and establish what that figure is,” Dulieu said in an email.

Workers at the plantations in the conflict-afflicted country complained of housing in severe disrepair, wages just over a dollar a day for intense field labour and a lack of proper medical care in the rural region.

It remains unclear how, when or if the new initiative will ameliorate those concerns.

“Feronia has been operating outside of public attention for far too long,” Devlin Kuyek,  a researcher with GRAIN, a land rights group that has been following the situation of plantation workers, said in an email. “Since the Thomson Reuters (Foundation) article, it seems they are now scrambling to deal with years of neglect of the local communities and workers that is now in public view.”

Feronia is partially owned by European taxpayers through the CDC in the UK, which receives government development aid funds, and Phatisa, a private equity firm partially financed by the French and Spanish development agencies.

Feronia is still losing money, so it remains unclear who will pay for the new facilities.

Dulieu said he is optimistic Feronia can “facilitate third-party funding” for the new infrastructure. It plans to use local contractors to make the improvements, once an assessment has been finished, in order to stimulate “local enterprise”, he said.