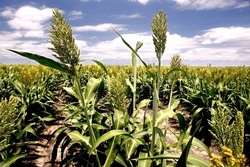 Black River Asset Management, a subsidiary of Cargill, one of the world's biggest food producers, has bought four grain-producing farms in the Darling Downs farming region between Dalby and Chinchilla.
Financial Review | 17 November 2014

Black River Asset Management, a subsidiary of Cargill, one of the world's biggest food producers, has bought four grain-producing farms in the Darling Downs farming region between Dalby and Chinchilla.

The four farms are in an area bordered by Warra, Jandowae and Jimbour, about 230 kilometres west of Brisbane and close to end users, the feedlots. The farms produce a summer sorghum crop, harvested in October, which provides feed grains to the beef, dairy, pig and poultry industries, as well as a summer wheat crop with a harvest from March to May.

It is understood that Black River, which operates in Australia as Black River Advisors, will appoint local farm managers to run the properties, while providing its global agricultural management expertise.

Black River Advisors and Cargill declined to comment on the acquisitions.

Black River's Australian agricultural portfolio includes Mackay sugar cane farm Marwood Farm, which it purchased for $10.5 million last year in a joint venture with Mackay Sugar. It also owns 70 per cent of the $186 million unlisted agricultural land and logistics company BFB Group, based in Temora in the NSW Riverina region.

BFB owns the prized Billabong Station, an 1875-hectare cropping and pastoral property in the Eurongilly Valley, east of Wagga Wagga.

Black River is an independently managed subsidiary of Cargill, the biggest privately held company in the US, which in 2014 generated revenues of US$135 billion ($154 billion) and net earnings of US$1.9 billion.

In Australia, Cargill's business operations include grain, oilseeds and cotton origination as well as providing food and feed items for the Japanese and South East Asian markets.