Three reasons why the 'rai Principles' undermine the right to food, land and resources 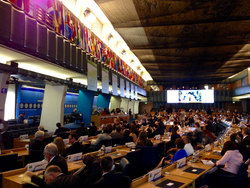 Three reasons why the 'rai Principles' undermine the right to food, land and resources

During its 41st session in Rome last 13-18 October 2014, the Food and Agriculture Organization's (FAO) Committee on World Food Security (CFS) endorsed the Principles for Responsible Investment in Agriculture and Food Systems or the rai Principles. (The final rai document can be accessed here.)

PAN Asia Pacific (PANAP) strongly believes that while the rai Principles claims to be rights-based and supposedly recognizes the right to food, its overarching framework and several of its principles actually contradict such claims.

Specifically, there are three key issues in the rai Principles that we think could further undermine the right to food, land and resources as a human right, and the food sovereignty of the people.

1. The rai Principles is premised on the current anti-human rights trade and investment regime.

While the rai Principles supposedly supports the progressive realization of the right to adequate food in the context of national food security (under Background and Rationale), it contradicts itself by saying that the "rai and the food systems should be consistent with international agreement related to trade and investment" (Roles and Responsibilities paragraphs 33 and 34).

Also, the principles are based on the "relevant multilateral World Trade Organization (WTO) agreements" as one of the many foundations for responsible investment in agriculture and food systems (paragraph 19.B.iv). The current trade policies, including bilateral agreements and those implemented under the WTO pacts do not promote, recognize and protect human rights. In fact, the WTO agreements and the WTO itself have already been delegitimized for worsening the hunger and food insecurity of hundreds of millions of people, and the overall backwardness and even destruction of agriculture in many developing countries.

Trade policies such as farming subsidies in developed countries and the removal of subsidies in developing countries, dumping, and trade-related intellectual property rights, among others, have had adverse impacts on the human rights of small food producers, particularly in rural areas.

The rai Principles is apparently oblivious to this reality.

2. The rai Principles promotes corporate agriculture at the expense of small food producers.

While the CFS 37 (October 2011) has recognized that smallholders themselves undertake the bulk of investments in agriculture and that they place an important role in producing most of the food consumed locally in many developing regions, the rai Principles failed to highlight such recognition.

Instead of placing due emphasis on the rights of small food producers, the rai Principles caters to all types of investors and promotes all type of production systems, including corporate agriculture that studies and experience have shown are ecologically unsustainable and harmful to the economic, social and cultural rights of local communities, especially in the poor countries. Further, by failing to put emphasis on small food producers, the rai Principles does not provide an outright protection against land and resource grabs that are perpetrated by large corporate investors and often supported by national and local governments.

Instead of providing support to small food producers through public investments, the rai Principles encourages privatization through public-private partnership (Roles and Responsibility, paragraph 40.iii). Further, while the rai Principles seems to recognize sustainable production through agroecology, it also promotes "sustainable intensification" (Principle 6.vi) which is widely supported by agrochemical corporations as well as multilateral institutions including the World Bank.

Sustainable intensification is defined as "enhancing agricultural yields with minimal environmental impact". However, corporate agriculture practices do not merit the term "sustainable" because they do not conform with established principles that are central to sustainability. Also, the FAO has established long ago that the world already produces enough food for everyone; thus, intensification of production is not the real issue. Rather, that every man, woman and child has access to food and that small food producers have access and control over productive resources to produce food in a sustainable manner.

3. The rai Principles does not recognize the landless farmers.

A quarter of the world's 1.1 billion poor people are landless, according to the International Fund for Agricultural Development (IFAD) who, unfortunately are not recognized by the rai Principles. The usual "small food producers" has been replaced by "smallholder" (Introduction, paragraph 4).

In previous FAO documents, smallholders are defined as "small-scale farmers, pastoralists, forest keepers and fishers who manage areas varying from less than one hectare to 10 hectares." The term "smallholder" obviously does not include those who do not hold on to any property for their livelihood.

The non-recognition of "landless" in the rai Principles is tantamount to ignoring the need for genuine land reform to address landlessness and historical injustices in rural communities. This point is a very crucial issue if the rai Principles truly intends to become a rights-based document because in many developing countries, the lack of access to productive resources such as land provides the material basis for the endless violation of the human rights of most poor rural families.

It appears that the rai Principles intends to resolve the long-standing issue of landlessness by simply wiping out the landless in a CFS document. This is a total disregard to the long and arduous struggles being waged by peasant and people's movements, especially in the poor countries, to give land to the landless through genuine agrarian reform.

Fight for the people's right to food, land and resources continues

While the civil society organizations (CSOs) that have actively participated in the CFS process on the rai Principles, including PANAP, have been able to wring some concessions such as the "do no harm" principle (Conceptual Framework, #20), respecting the rights of workers and recognizing living wages (Principle 2.i), advancing women's equal tenure rights and access to and control over resources (Principle 3.i, iii, iv), etc., the serious issues mentioned above undermine these concessions.

PANAP believes that the rai Principles should be taken as a whole document rather than just choosing specific parts that seem to serve the interest of our constituency. While it has some good parts, one must consider that its overarching framework is flawed and does not reflect the concerns and interests of small food producers, the landless and other vulnerable communities.

The voluntary rai Principles is actually a step backward from what has already been achieved in the people's struggle for a rights-based approach in advancing food security and overall agricultural development considering that other instruments, some even legally binding, categorically uphold, promote and protect human rights. Worse, the rai Principles could even be used to justify the land and resource grab in the name of trade and investments and further advancing the corporate agenda in food and agriculture.

Ultimately, the best hope for the right to food, land and resources still lies in the people's continuing struggle.